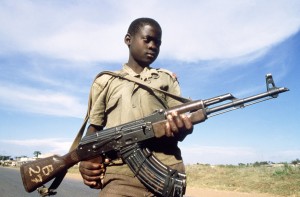 Amnesty International has been able to trace the flow of weapons from manufacturers exhibiting at IDEX to the very weapons used in countries where serious human rights abuses have taken place.

There were no checks in place then to stop the free flow of weapons:

But we can ensure that there are checks in place now if we urge the Obama administration to support a strong Arms Trade Treaty.

All the while, NRA officials keep fueling a false “gunversation” about the Arms Trade Treaty claiming that its purpose is to infringe on American gun owners rights — knowing full well that it has no impact on gun rights within U.S. borders whatsoever. In fact, the gun lobby was in D.C. yesterday to continue spreading their misinformation campaign during Congressional hearings about gun control.

So if NRA officials have their way and the Arms Trade Treaty is weakened, then we would see more children recruited as soldiers, more women raped in conflict zones, more families driven from their homes and more senseless deaths.

We must make sure the record is set straight before March 18, when Arms Trade Treaty negotiations begin. We must do all we can to close dangerous loopholes, like the one that makes international gun shows an open bazaar for the suppliers of warlords and human rights criminals.

The Arms Trade Treaty has the potential to protect families from gun violence on a global scale. Show President Obama that you care about protecting families worldwide against gun violence by taking action now.