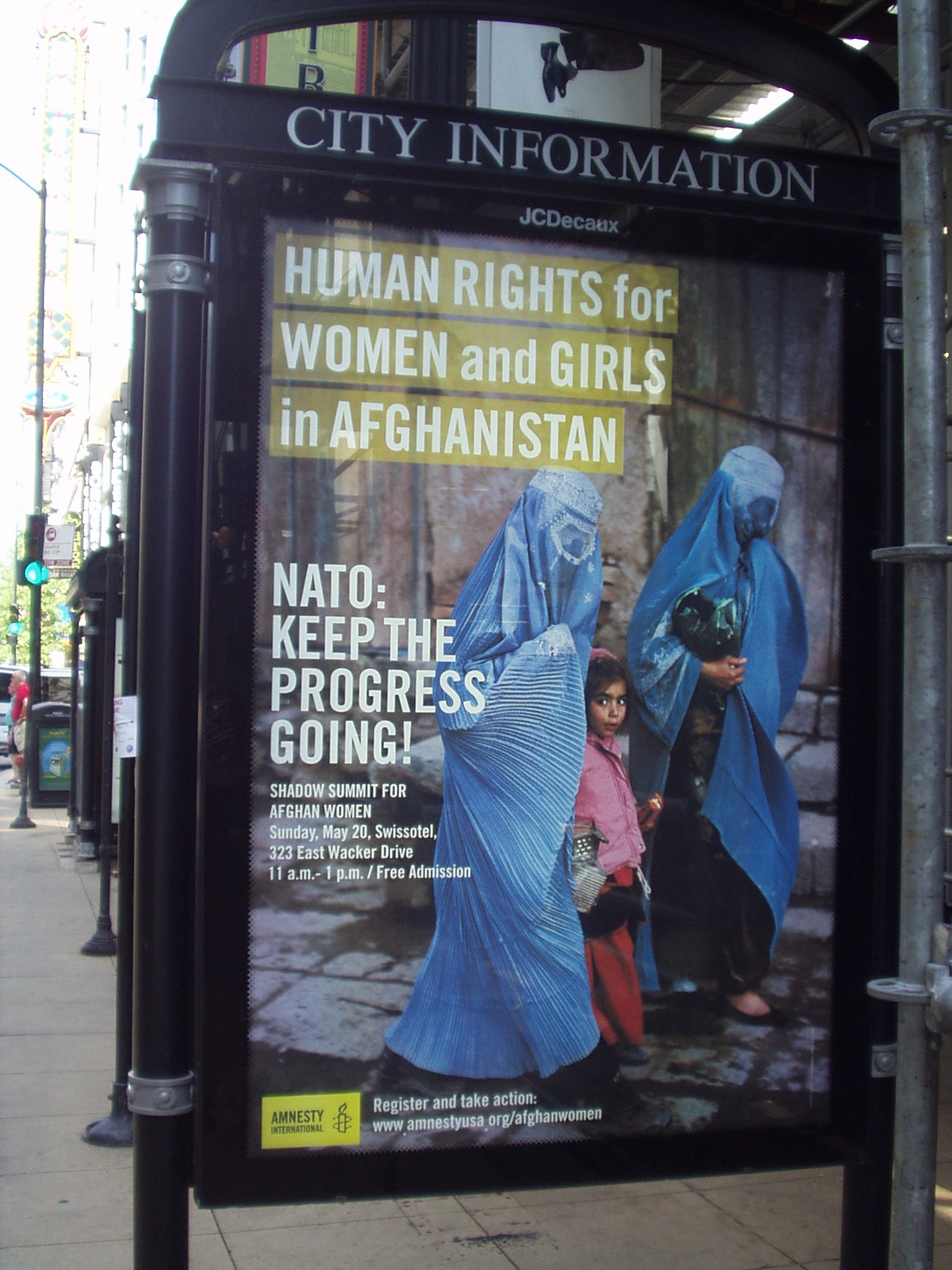 As the NATO summit gets underway tomorrow in Chicago, Amnesty International USA will host a “Shadow Summit”with leading Afghan women’s rights activists to remind NATO of the conversation it should be having on Afghan women’s human rights.

The shadow summit poster, which features the words “Human Rights for Women and Girls in Afghanistan” and “NATO: Keep the Progress Going!” has generated some controversy over the last few days.  You can guess which sentence triggered the controversy.

Some are asking, is Amnesty now a cheerleader for NATO?  Does Amnesty support the war?  What was Amnesty thinking?!

The shadow summit — and the poster — is directed at NATO, not to praise it, but to remind the leaders who will be discussing Afghanistan’s future this weekend about what is really at stake if women’s rights to security, political participation and justice are traded away or compromised.

We were thinking about the hard won gains Afghan women have made since the fall of the Taliban.  Ten years ago, Afghanistan had one of the worst human rights records in the world in terms of women’s and girls’ rights. The Taliban banned women from working, going to school or even leaving home without a male relative.

Today, three million girls go to school, compared to virtually none under the Taliban. Women make up 20 percent of university graduates. Maternal mortality and infant mortality have declined. Ten percent of all prosecutors and judges are women, compared to none under the Taliban regime.  This is what we meant by progress: the gains Afghan women have struggled to achieve over the past decade.

Afghan women’s groups have been sounding the alarm about being sidelined in key decisionmaking processes and about the prospect of a worsening human rights situation as the Afghan government assumes security responsibility in the country and seeks a political settlement with the Taliban.  In areas still under Taliban control, violence against women is rampant, and a recent statement by the Ulema Council (a council of religious scholars) — defended by President Karzai – warns that women should “respect the right of men to polygamy” and should “not travel without a close male relative.”

As a matter of policy, Amnesty doesn’t take a position for or against NATO.  We didn’t call for the bombing of Afghanistan – in fact, readers who were members or following our work when the bombing started in 2001 will remember that our message was “justice not revenge” and that we went into crisis response mode out of concern for the impact on civilians.

And we’re not calling for NATO to remain in the country.  What we want is for peace talks to be inclusive and reflective of Afghan society, including women, in both the planning and the talks themselves.  We want a constitutional guarantee of equality for women and men, along with benchmarks and robust monitoring for women’s rights.  We want negotiating teams involved in peace talks to include at least 30% women.  We want a trust fund to be set up independently of the government, to be administered by women to protect women’s rights and support civil society. We want justice institutions to be trained on implementing the elimination of violence against women law and other measures to protect women’s rights.

And we want the National Action Plan for the women of Afghanistan to be funded to ensure gender mainstreaming in Afghanistan’s government institutions.  We will release an open letter to Presidents Obama and Karzai detailing these demands prior to the shadow summit.

Is the poster confusing?  Yes, especially as it is plastered all over a city packed with NATO protesters.   But please don’t let that stop you from seeing what the shadow summit and Amnesty’s work in support of Afghan women are really about.

It’s our best shot at bringing Afghan women’s voices to the forefront of the NATO Summit.   If you’re in the city, please show up to show your support and then join us for a demonstration at Navy Pier.