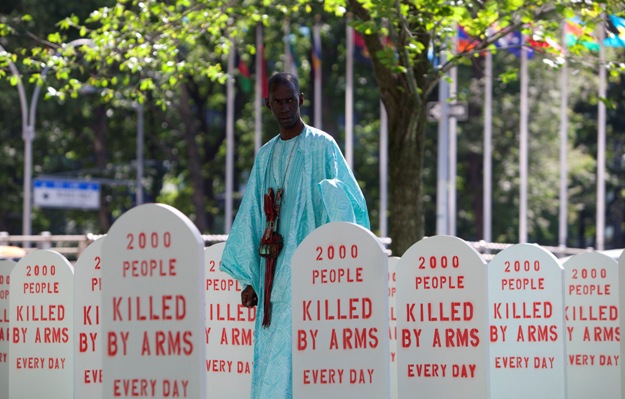 As the world's largest arms exporter, the U.S. has a crucial role to play.

”
Significant problems remain, however: the most pressing include gaps in the scope (ammunition, for example, is excluded from the treaty’s risk assessment process); weak enforcement provisions; and exceptions written into the treaty regarding “existing contractual obligations.”

As the world’s largest arms exporter, the U.S. has a crucial role to play with its key partners in the negotiations, both in fixing these problems and in standing firm against other skeptical governments who might still try to weaken the draft. Moreover, the U.S. must not water down the “Golden Rule.”

With only a few days left we need your voice more than ever. Join us in calling on President Obama to ensure that the final text of the treaty addresses these concerns, and in particular, that it does not weaken the Golden Rule and covers all conventional weapons, munitions and equipment – such as small caliber artillery, drones, some armored and riot control vehicles, tear gas, and military aircraft and helicopters – that are commonly used for war crimes and serious human rights violations.

A strong Arms Trade Treaty will make it much harder to send arms to where they will be used to harm civilians and violate their human rights. We believe the treaty can be a major step forward in preventing many atrocities.

Together we have come this far. Now we need to make sure President Obama pushes a strong Arms Trade Treaty across the finish line. Will you help us?

3 thoughts on “10 Years of Campaigning, Three Days Left to Change the World”