You can make a difference right this minute.

In Jeddah, Saudi Arabia Saudi blogger and prisoner of conscience Raif Badawi is behind bars, waiting to find out if he’ll be flogged again on Friday, and whether he’ll spend 10 years away from his wife and little children in prison. His crime? Blogging. In fact, one of the posts that had him imprisoned was about Valentine’s Day and Saudi Arabia’s religious police.

Raif isn’t the only one that has been targeted by the Saudi authorities.

Raif himself told his wife, “Ensaf, what about the other prisoners of conscience in the Kingdom?” One such prisoner is Raif’s lawyer, Waleed Abu-Al Khair, who has also been given a 15-year sentence for his work as a human rights defender. Hundreds of the country’s activists, dissidents, bloggers and human rights leaders are also behind bars.

In the wake of King Abdullah of Saudi Arabia’s death, the U.S. must call on his successor to end the crackdown on free speech in the Kingdom and free all Prisoners of Conscience, including Raif and Waleed.

Your voice is instrumental in urging members of the U.S. Congress to put human rights at the center of U.S. foreign policy.

Join me in calling on members of Congress to raise their voices and help free Raif Badawi by adding their names to a member letter to the newly installed King Salman of Saudi Arabia, led by Representatives Peter Roskam and Jim McGovern. 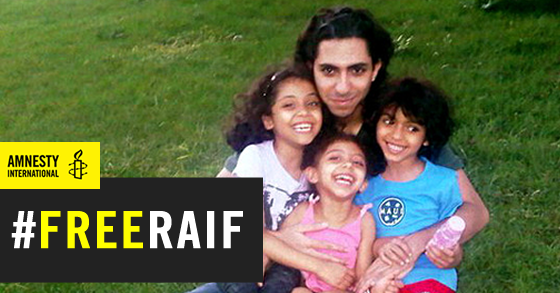 The Roskam-McGovern letter is one big step towards ensuring that Raif and Waleed, along with countless other writers and activists in Saudi Arabia, are released and protected.

Honor Raif’s request and call on your representative to ask for the release of all prisoners of conscience.

Across the ocean, Valentine’s Day in Chicago is not a cause for celebration for survivors of Chicago Police torture, either. For over twenty years now, the legacy of torture by the Chicago Police Department has remained unanswered, but the survivors are demanding the restorative justice they need to heal. Between 1972 and 1991, more than 100 people of color were tortured, shackled to chairs, electrocuted and denigrated with racial slurs by former Police Commander Jon Burge and the officers under his command. Today, many of Burge’s torture survivors and their families continue to suffer from the psychological effects of the torture they endured. There are approximately 19 survivors of torture under Jon Burge who have never received evidentiary hearings. They remain behind bars.

Last year, former Police Commander Jon Burge was released from prison. And this Valentine’s Day, he will be released from house arrest and walk a free man. 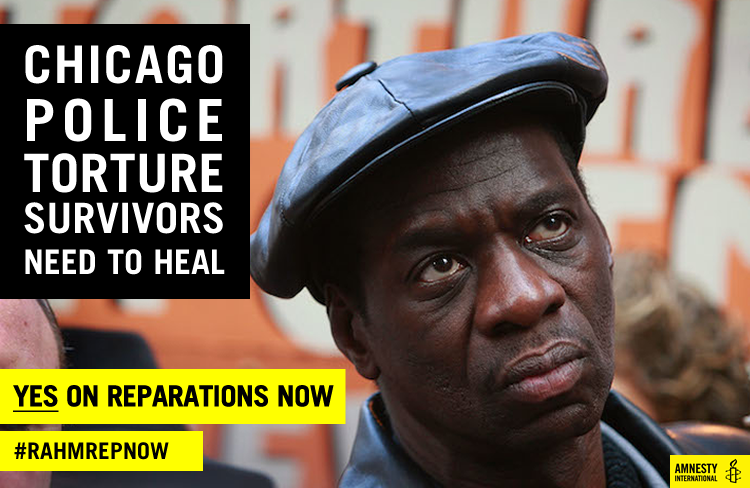 Under International Law, torture survivors must receive reparations for their trauma. There is a reparations ordinance pending in Chicago City Council that would finally fulfill these obligations. It has the support of more than half of the current Chicago alderpeople, but the city council has not scheduled a hearing, and Mayor Rahm Emanuel has failed to take meaningful steps to move the ordinance forward.

With just a little more pressure, the Reparations Ordinance could finally help survivors and their families heal.

Stand up against torture and ill-treatment from Jeddah and Chicago. This Valentine’s Day, we’re asking you to pick up the phone and call not one, but two numbers today: Rahm Emanuel, mayor of Chicago, and your Member of Congress.