On December 12th, 2015, New Orleans was the site of a special, one-day exhibit, Art for Rights, bringing together more than a dozen artists from around the world to highlight 12 of the most troubling human rights cases we face today. In honor of International Human Rights Day, and in conjunction with Amnesty’s annual Write for Rights campaign, each canvas told a bold story about injustice, persecution, and also courage.

Each work of art and creative installation called attention to the story of one of twelve international human rights cases. “Waleed Abu Al-­Khair“, by BK The Artist, takes the view inside the many layers and dimensions of a man who has been tortured and imprisoned for 15 years for defending the human rights of others in court. 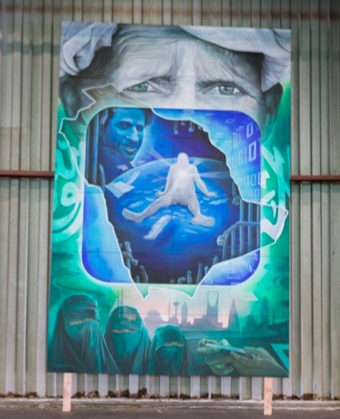 The story of “Yecenia Armenia Graciano” by Sophia Dawson, aka I AM WET PAINT, evoked the mute status of a Mexican woman who was beaten and raped by police officers until she confessed to the murder of her husband. Yecenia remains in jail while participants wrote letters to the Mexican government calling for her release. 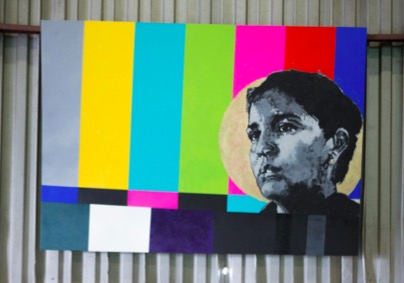 Choosing New Orleans as the site for Art for Rights was not arbitrary. The state of Louisiana has the highest rate of incarceration in the entire world. Not only does Louisiana lock up more of its citizens than any state in America, a country that leads the world by far, but one of this year’s Write for Rights cases is located in the state. Albert Woodfox has been held in solitary confinement for 43 years, and despite multiple court orders for his release, the state of Louisiana continues to hold him in isolation. Artist Jesse Krimes built an installation at Art for Rights that brought viewers into Albert’s life by recreating the tiny 4’ x 6’ cell that he has spent the past four decades in. Attendees lined up for a chance to step inside the room, sparse with a cot, a tiny metal shelf and a combined wash sink and toilet. Krimes dotted the walls with tiny peepholes through which the viewer could see images that amount to the dreams that Albert might have within the walls–dreams of walking freely, of hugging a person, of breathing open air. 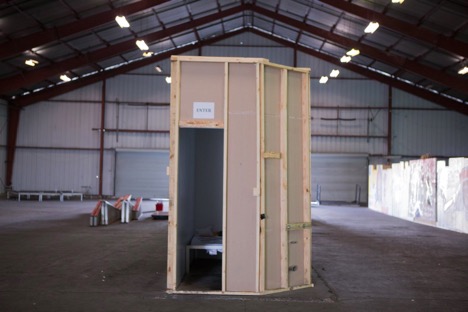 The #StudioBe warehouse floor was filled with people who were moved to take action. The space itself, owned by artist Brandan “Bmike” Odums, is a reclamation of community in an area where residents have been pushed out first by weather and then by rising rents. What Art for Rights created was more than just a space for the community to gather–the participation in the stories told by the artwork moved people to explore community-building together, from a perspective of full humanity and shared value for basic rights. While the 6k postcards are an impact we can quantify, the day also brought out something intangible, creating a temporary space for people to come together to discuss how we’re going to be better neighbors and allies in the struggle against oppression.

This is the very reason that Art for Amnesty exists, to use art as the entry point for inspiring new conversations of how human rights can be protected in our world. Artists have the power to convey, simply and unambiguously, what scholars need volumes to defend. They have the ability to undermine and challenge corrupt power structures without a single act of violence. As Amnesty International continues in its mission to protect human rights around the world, artists are an integral part of that effort.

Take action NOW by calling on Louisiana Governor Bobby Jindal to ensure Albert’s cruel and unjust confinement is not his legacy.

View more artwork from the Art for Amnesty event.

13 thoughts on “How Art Can be a Catalyst for Change”