The common narrative about Syria has focused on the limits to what the international community can do amid the conflict to bring an end to human rights abuses. That narrative is wrong. 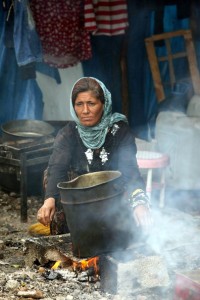 A new Amnesty International report released today makes it clear that several straight-forward measures, if backed with international support and financing, can do much to alleviate significant human rights and humanitarian issues facing the more than 2 million Syrian refugees.

That number is expected to grow. Almost one-third of Syria’s population has fled their homes. Some 4.25 million people are displaced internally in Syria, and many are seeking to flee the borders. The U.N. reports that the rate of Syrian refugees hasn’t been matched in the world since the Rwandan genocide two decades ago.

Of particular concern is the gender violence women and girls face in the refugee camps. The Za’atri camp, where gangs control sections of the camp, has been described by the U.N. as “an insecure living environment, in which vulnerable groups may face serious protection risks, including sexual exploitation and abuse, without recourse to the Jordanian justice system. A culture of impunity reigns.”

Many women told Amnesty International that the communal toilets are unlit – the lights are often stolen by individuals from within the camp – and they feel unsafe using them, especially after dark. In particular, they fear they will be subjected to sexual violence or harassment or otherwise attacked.

Amnesty International is pressing Jordanian officials to ensure women and girls safe access to toilets and wash facilities at the camp.  That one measure could significantly change daily life for these women.

But the neighboring countries running these camps have taken on a tremendous burden, and they rightfully say they need international help to make a difference in the camps.

To date, the USA, Kuwait and the European Commission have provided the largest financial support to the Syria Regional Response Plan. However, despite their donations and those of others, the plan is currently only 47 percent funded.  Amnesty International believes these nations should step up and fulfill their pledges.

In addition, many EU countries are not doing their share to open their countries to meet the need. The 28 countries have taken a combined total of 18,700 refugees, 70 percent of which are in Germany and Sweden.

Sweden took a positive step at the start of September 2013 when it announced that individuals coming from Syria could apply for permanent residency status.

So here’s one more easy step: Anyone fleeing Syria should be considered in need of international protection and not be subject to immigration detention.

In the wake of chemical attacks within Syria, the international community spent great energy focused on the limits of intervention. It’s time to shift the discussion to what is within our reach: The world has a greater ability to affect and improve Syrian lives than many think.