“We have no women for marriage” is Khawlah’s usual response when Jordanian or other foreign men ask about marrying her 14-year-old daughter when they come looking for a bride.

Like other Syrian women refugees I met during a recent visit to Jordan, Khawlah complained how Jordanian men constantly bombard her with marriage proposals or requests to arrange marriages with refugee girls.

“I do not have work for you, but could marry you if you like,” is what ‘Aisha was told when she went looking for work. A 22-year-old student of English Literature, she complained that one of the reasons her job search in the Jordanian capital of Amman has been futile so far is that she often receives marriage proposals instead of paid work.

Other Syrian women refugees I met in Za’atri camp – Jordan’s biggest refugee camp, hosting around 130,000 people – also mentioned that some Jordanian men visit the camp looking for brides. Yet it appears that many of these men end up leaving the camp disappointed.

The head of a community-based organization providing relief services to Syrian refugees told me that many men from the Gulf and even Europe approach him and his organization to try to arrange marriages between them and Syrian refugee women. He claims to have refused all of these requests.

Syrian women refugees I spoke to complained that they are exposed to sexual harassment more than Jordanian women simply because of their status as refugees, which is generally associated with economic vulnerability. U.N. workers as well as human rights and women’s rights activists I interviewed in Jordan backed that point up.

Indeed, some of the Syrian women refugees I spoke to mentioned that this stigmatization and harassment is making their husbands overly protective, limiting their mobility. In some cases, ensuing family tensions appear to have led to domestic violence.

The story of Farah, a 28-year-old woman refugee from Syria and a mother of three, is an example of the problem. Farah told me that on one occasion, she preferred to endure thirst for a whole day until her husband returned from work, rather than contacting the company which supplies drinking water to their neighborhood – in Jordan, drinking water must be purchased – out of fear the delivery men might harass her and her husband’s jealousy would be fueled.

“My husband is jealous because I get harassed all the time. The other day, my children and I were followed all the way home by a Jordanian man who was pestering me to marry him. I told him, ‘Can you not see that I am married and have children? Leave me alone!’ He responded that he was willing to divorce me from my husband, if that was what it took,” she said. 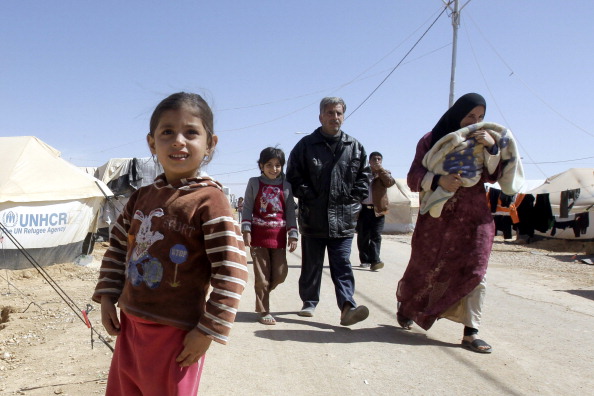 Myths and Reality About Early Marriages

Most of the activists and relief workers I met in Jordan blamed such harassment on media hype about “cheap Syrian brides” or “prostitutes.” Since the beginning of 2013, some news reports have been published speculating about the frequency and nature of early marriages among Syrian refugees in Jordan. Some even spoke of “marriage markets” in the Za’atri refugee camp, or matchmakers who arrange temporary marriages between young Syrian brides and suitors from the Gulf.

However, during discussions with activists and aid workers in Jordan, it quickly became evident that the reality is much more complex than the picture that was portrayed by some news reports.

They are exposed to sexual harassment more than Jordanian women simply because of their status as refugees, which is generally associated with economic vulnerability.

”
It is true that Syrian refugee women and girls in Jordan – most of whom are from the southern Syrian governorate of Dera’a – tend to marry under the age of 18. It is also true that some Syrian refugee women and girls have married men of other nationalities, such as men from Jordan and the Gulf. The brides’ young age and the perception of their inferior status as refugees put them at risk of sexual exploitation and other abuse within these marriages, some of which may be temporary.

It is important to remember that getting married at a young age is a long-standing practice in Syria, particularly among the rural population. The refugees have simply imported this tradition to Jordan.

Syria’s Personal Status Law allows, in some circumstances, for marriages of girls as young as 13. While we were in Jordan, my colleagues and I met a number of women refugees of different age groups who were children when they got married back in Syria.

According to a U.N. Women assessment focusing on early marriages among Syrian refugees in Jordan and which was published in July 2013, social customs and family “honor” still appear to be the main motivation behind Syrians marrying off their daughters when still children – factors which appear to be more significant than their current economic deprivation and poverty. According to discussions I had with U.N. and aid workers, in the Za’atri camp the almost non-existent privacy due to proximity between tents, as well as widespread gang activity and the lack of security have played a significant role in the continuation of this practice by the families living there. While this reality does not mean the risks associated with the practice are any less serious, it highlights the entrenched nature of the practice and how difficult it is to combat.

Early marriages are by no means unheard of elsewhere in the Middle East and North Africa region. In Jordan itself, women’s rights activists are still battling to amend the current Personal Status Law. The Jordanian law allows for girls below the age of 18 to marry if a Shari’a judge believes that it is in her “best interest,” a clause that activists believe is vaguely worded on purpose to give judges a lot of room for interpretation.

The brides’ young age and the perception of their inferior status as refugees put them at risk of sexual exploitation and other abuse within these marriages, some of which may be temporary.

”
Early marriages can violate the international law requirement that marriages be entered into “only with the free and full consent of the intending parties.” They also expose young girls, who may not be able to consent freely, to coercion and pressure from adults, exploitation and abuse and risk of early pregnancy with serious, long-lasting health consequences.

According to statistics from the Jordanian government, most registered marriages of Syrian refugees are to other Syrians rather than people outside the refugee community. In fact, Syrian families we interviewed seemed quite offended by the suggestion that they might want to marry off their daughters to men of other nationalities. Most said that the main reason for refusing such marriages is because it is difficult to verify the background and social status of potential suitors. They also prefer to have their daughters living in the same country as them – marrying them off to someone from another country would decrease the chances of this, should they ever return to Syria.

An additional problem is that many marriages among Syrian refugees, particularly in Za’atri camp, do not get registered officially. This erodes the already limited rights afforded to women in general under the Personal Status Laws in Jordan and Syria. It also seriously impacts their ability to register children and to access some services provided by UNHCR, the U.N. refugee agency.

Why is it that Syrian refugees either cannot or choose not to register their marriages? Some simply lack the needed documentation, but others have been so impacted by what they have been through in their flight from Syria that the protection they would gain by officially registering their marriages seemed insignificant in comparison with other more pressing needs.

The Syrian women refugees I met had an endless list of grievances. They are traumatized, deprived and stigmatized, yet their ultimate priority remains their and their children’s survival through access to sustainable income, shelter, food and adequate medical care. Whether their marital rights were preserved or not seemed to be a trivial afterthought.

When I explained to Huda, a 25-year-old newlywed Syrian refugee in Za’atri camp, the importance of registering her marriage officially, she asked: “Would they give us a caravan if we register our marriage?”

For confidentiality reasons all names have been changed and some other details withheld.

2 thoughts on “Have You Seen What’s Happening to Syrian Refugee Women and Girls?”