The rain falls hard in the north. In fact, it’s rained in every city we’ve visited. It poured all afternoon as we rode the long stretch of highway away from Ithaca and crossed the New York-Pennsylvania border. The rain finally stopped when we reached our motel for the night, and the supplies we have strapped to the roof of our car were soaked.

We checked in, and walked into our dark room, another room in another city. Across the darkness, I saw the red block numbers of the clock glaring at me. It was past midnight. We set to work unpacking, drying, and refolding hundreds of t-shirts. When I finally sat down hours later to work out the details of the next direct action training and finalize the next day’s agenda, I could feel the exhaustion of the road in my bones. Wearily, I looked at the clock. It was almost 3 a.m.

We can't just rely on the struggles and leaders of the past - if we're going to see a world where everyone’s human rights are respected, we're the ones that are going to have to do what needs to be done.

”
I felt the loneliness begin to creep in, edging its way across my skin, pulling at me. For a moment, there was a whisper of hopelessness in my mind as I remembered the powerful adversary we are up against: a government whose secret Game of Drones determines who lives and who dies in its shadowy ‘global war.’

But then I noticed Flor, sitting on the other bed, leaning over a laptop next to a pile of shirts and typing intently. I was struck by her quiet focus, and all of a sudden, was enormously grateful she was there with me. Her commitment to what needed to be done in that moment – formatting labels for Game of Drones posters – grows from an understanding that no task is too small when you’re fighting for human rights. I took a deep breath, recommitted to this struggle, and we finished the night’s work side by side.

Flor Montero has been traveling with me since we started this tour, most often doing the hard work of activism that many never see. She was born in Washington Heights and grew up in the Bronx. She was raised by a single mother who emigrated from the Dominican Republic to get a job that would allow her to take care of her family in New York and abroad. She saw her mother’s struggle, and knew that she had to honor the sacrifices her mother made on her behalf.

Flor made the difficult choice to leave her friends and community in the Bronx to become the first person in her family to go to college. While she was in college, she pushed herself even further and spent a semester in Jordan. She’s told me many times that it’s the personal connections she has to her family, to her community, and to people half a world away that keep her going. 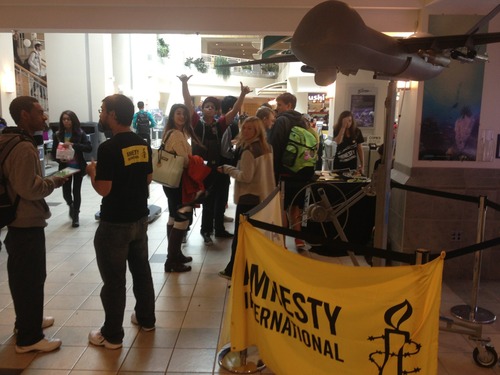 Activists during the tour stop at Penn State call on President Obama to end his #GameOfDrones.

“I think about my generation, and the need for us to continue sustaining true activism,” she told me the other day when I asked her about why she made the choice to join Amnesty International in this fight against unlawful drone strikes. “We can’t just rely on the struggles and leaders of the past – if we’re going to see a world where everyone’s human rights are respected, we’re the ones that are going to have to do what needs to be done.”

Since she learned about the massive and growing numbers of people dying in U.S. drones strikes, Flor’s commitment has been deep and unwavering. When she decided to come on this tour, she dedicated herself to the hard work of building a movement, whatever it takes. I’ve seen her spend long hours, meticulously packing boxes of materials and stuffing envelopes. I’ve heard her on the phone reserving classrooms and renting tables. She responds to emails and fills out excel spreadsheets and fixes broken printers in hotel lobbies. She posts photos on Facebook and Tumblr, and tweets the Amnesty action to stop extrajudicial killings. She talks to everyone she knows about what is happening in Yemen, Pakistan, and Somalia, and asks them to join the call to demand that President Obama release the names of victims of drone strikes.

When your soul burns at the sight of injustice, you do what needs to be done.

Five years from now, we can each look back and say we were part of the movement that stopped unlawful drone strikes, or that we sat at home on the couch watching and waiting while other people made history. I’m asking you today to join Flor and me in this fight. The movement to demand an end to the Game of Drones is growing day by day, and as we cross into Cincinnati and look ahead to Madison, we have one question for you: are you with us?

One thought on “Whatever It Takes: Ending the #GameOfDrones”