As I write these words, the sun is just starting to come up on a crisp, clear Vermont day. It will warm up later, but the chill in the air and the turning leaves tell me one thing is sure: winter is coming.

As the seasons change, another year of the U.S. government’s shadowy ‘global war’ continues. The Obama Administration’s drone policy remains shrouded in secrecy despite serious allegations of unlawful killings. Amid raids and strikes, untold many have been killed and injured, and countless other lives remain perilously in the balance as President Obama plays the deadliest of games: the Game of Drones.

This fall, we’re standing up and saying this has got to end now. I’m taking the fight to campuses across the country, meeting people in classrooms and common rooms to recruit them into a growing movement calling on President Obama to release the names of victims of drone strikes, and end this Game of Drones! 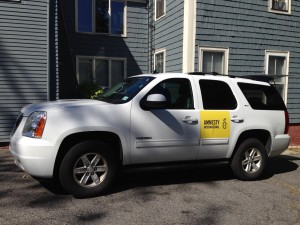 In just a few hours, I’ll head to Ithaca College, unload our drone replica, and get to work talking to as many people as possible. On every stop, we’ll be showing Jeremy Scahill’s Dirty Wars, which tells the story of the U.S. government’s ‘global war’ theory that treats the whole world as a battlefield, sidelines international human rights law, and puts the lives of untold many at risk. Tomorrow, we’ll be training new Amnesty members in direct action to raise awareness on this campus, and then we’re moving on to Syracuse, New York to start again.

Over the next seven weeks, we’ll be starting new Amnesty groups and mobilizing new Amnesty members, all the while building the momentum that we need to demand the truth and protect human rights. I’ll be collecting stories of new activists, sharing photos and videos, and asking everyone I meet to join the Amnesty movement.

As we all know, when you become an Amnesty International member, you become part of something bigger than yourself. You join a community of people who care about human rights the way that you do, and whose voices and actions united make a difference.

Amid raids and strikes, untold many have been killed and injured, and countless other lives remain perilously in the balance as President Obama plays the deadliest of games: the Game of Drones.

But a track record of success is not enough. We need to decide, today and every day, to enter the fray or stand back and watch as human rights are eroded across the world. When we organize, we become strong, and together we can use that strength to stop the Game of Drones.

That’s why this tour matters now more than ever, and I need your help along the way. As I cross the country with my team, follow our progress on Twitter, Facebook, Instagram, and Tumblr, and join us in telling the story of our fight against the Game of Drones. Follow #GameOfDrones, retweet and stay posted on this blog to see how the movement grows.

Share the petition and join me in raising the call: tell President Obama to end the Game of Drones!

2 thoughts on “Many Voices, One Fight: Building the Movement to Ending Obama’s Game of Drones”