Less than a week later, on October 19, 2012 the CIA, that runs the covert drone program, announced it would ask the White House to approve a significant expansion of the agency’s fleet of armed drones so that it could sustain its lethal campaigns in Pakistan and step up campaigns in Yemen and Somalia. 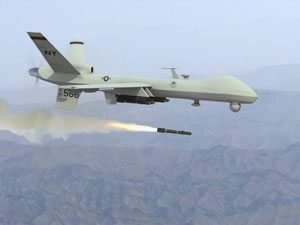 The US drone program is secretly run by the CIA.

Regardless of whether Americans feel any sympathy for the 500-800 civilians killed from drone strikes or the 176 children who have perished when killing by remote control fails to distinguish between funeral processions and weddings and alleged militants, they should be concerned about the glaring lack of accountability surrounding the drone program.

Specifically, because the drone program is operated and run by the CIA it skirts requiring approval by either the United States Senate or the U.S House of Representatives, in official terms there is no drone program and no war declared against Pakistan, or Yemen or Somalia.

And yet, Predator drones, armed with Hellfire missiles are killing people in these countries in the name of American security. In court documents, the Obama Administration is still insisting that information about the drone program is “classified information.” Even after President Obama spoke on the issue of drones in July of this year, defending his drone program, his Administration continued to thwart publication of documents showing the justifications for drone killing and even went on to assert that the President’s words could not be used as an admission that the covert drone war was even taking place.

The New York Times has reported that President Obama has placed himself at the helm of designating a “secret kill list” that decides without any judicial or legislative input who the drones can target.

In Pakistan, the country where the majority of drone killing is taking place, the funerals and refugees coming from villages plagued by drone attacks are harder to ignore. Drone strikes have displaced hundreds of thousands of innocent people sending them into overcrowded refugee camps and teeming cities. Even more alarming, the anger and outcry at the violations of Pakistani sovereignty have actually driven many to be sympathetic to the militants allegedly targeted by the attacks.  Instead of focusing on the ravages and cruelties imposed by militant groups like the Tehreek-e-Taliban in Pakistan, the imperial over reach of the drone program, the ease with which it can target anyone at any time and shoot them from afar, has prevented the very reckoning that would allow Pakistanis to defeat and purge terrorism based on their own impetus.

In June of this year, the UN Special Rapporteur on extra judicial killings Christof  Heyn said that “drone strikes threaten 50 years of international law” expressing special concern about the fact that in several cases one strike closely following another actually kills rescuers attempting to aid casualties from the attack.  It is time end “the conspiracy of silence” the UN rapporteur said emphasizing that drone attacks were most devastatingly an attack on the system of international law. Amnesty International has also repeatedly condemned drone attacks, what we know about the attacks already demonstrates that they are unlawful and violations of the fundamental human right to not be arbitrarily deprived of life.

In tonight’s debate, as Americans consider which candidate they will elect, it is crucial that they demand answers on drones and the killing being done secretly in their name.

Take action: Tell the US to stop unlawful drone killings