Today’s analysis, released by the American Association for the Advancement of Science and based on imagery from August 9 and 23, provides a detailed follow up to our initial assessment from earlier in July. As the conflict in Syria escalates, the increased deployment of battlefield equipment and tactics in urban areas emerge in satellite images. Here are some of the key findings of the new analysis: 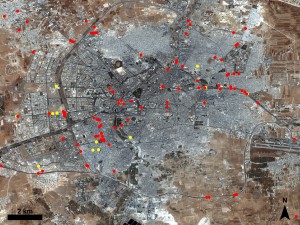 CLICK TO ENLARGE  Satellite imagery shows the widespread proliferation of roadblocks throughout the city. Yellow circles indicate roadblocks dismantled between 9 and 23 August, while the 102 red circles denote intact one. (c) 2012 GeoEye, produced by AAAS.

than several months ago. The bottom line is that if battlefield weapons and munitions are used in residential areas, the number of civilian casualties significantly increases. It comes as no surprise then, that according to the United Nations, August was not only the deadliest month, but also the month that led to the highest number of people fleeing Syria since the beginning of the uprising in March 2011. More than 250,000 Syrians are now registered refugees in neighboring countries, a number that could sky-rocket to 600,000 by the end of the year.

Our own crisis researcher documented individual cases of what devastating impact unlawful military tactics have on civilians. Her account from Aleppo includes evidence of entire homes that are bombed to nothing more than dust. Just last week, she reported from other towns and villages in northern Syria, where government forces have carried out indiscriminate attacks that killed civilians—in other words: war crimes.

Why are satellite images relevant?

This new assessment of risk to civilians in Aleppo is only the most recent effort to use remote sensing for human rights documentation. In fact, I have documented around thirty efforts by human rights organizations that have capitalized on satellite technology to document violations over the last decade. Another trend is that international investigations are increasingly using evidence collected through satellites in their work. Most recently, the UN Commission of Inquiry relied in part on satellite images to reconstruct events around the Houla massacre and to determine responsibility – subsequently finding that Government forces and Shabbiha members were responsible for the killings in Houla. Human Rights Watch also recently referenced satellite images to determine culpability for the Daraya massacre.

Previous investigations that used satellite images include the conflicts in Darfur, South Ossetia, and Libya. Here’s an excerpt from the Darfur inquiry:

Many of these investigations by international organizations regularly result in the creation of judicial proceedings, including at the International Criminal Court (as was the case with Darfur), or are used as evidence to prosecute the alleged perpetrators. Sticking with the Darfur example, then-ICC Prosecutor Luis Moreno Ocampo used satellite imagery of destroyed villages in his July 2008 application for an arrest warrant for Sudanese President Omar Al-Bashir on charges of war crimes, crimes against humanity and genocide.

In a highly imaged area such as Syria that leads to daily image collections, it is possible to “go back in time” through the archive of commercial satellite image providers. As the Houla example shows, this is significant to determine the responsibility of the various parties to the conflict, and potentially identify specific military units or militias operating in the area. This will be crucial for upcoming court proceedings, which aim to determine individual criminal responsibility for the atrocities committed in Syria—and I am convinced that this is only a question of when this going to happen, not if.

PS: Make sure to sign our current online action in support of a congressional resolution calling for the International Criminal Court to investigate the situation in Syria.

6 thoughts on “Justice For Syria: How Satellites Can Help”