Here is the key conclusion from today’s report:

The commission found reasonable grounds to believe that Government forces and the Shabbiha had committed the crimes against humanity of murder and of torture, war crimes and gross violations of international human rights law and international humanitarian law, including unlawful killing, torture, arbitrary arrest and detention, sexual violence, indiscriminate attack, pillaging and destruction of property. The commission found that Government forces and Shabbiha members were responsible for the killings in Al-Houla. The commission confirms its previous finding that violations were committed pursuant to State policy.

This document is a shocking account of the horrific human rights situation in Syria. The fact that the report only covers the period since mid February 2012 makes it even more worrisome. 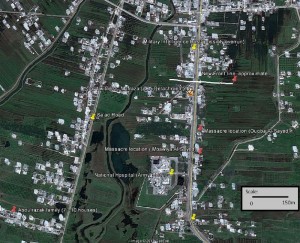 Another key finding of the report is that government forces and pro-government militias are believed to be responsible for the infamous Houla massacre from May 2012.

Finally, what I found interesting while reading through the report – and what many others might overlook – is the fact that the Commission of Inquiry consistently relied on satellite imagery to come to its conclusions. Regular readers of this blog might know that, as part of our Crisis Prevention and Response Team, I often work with satellite images to document human rights violations, especially during armed conflict situations such as Syria. The last images we released were actually of Aleppo, Syria. Here’s a related excerpt from the Commission of Inquiry report in regard to the Houla massacre:

Regarding the Abdulrazzak site, where more than 60 people were killed, the commission considered that a large number of perpetrators would have been required to carry out the crime. The commission found, through satellite imagery and corroborated accounts, that the movement of vehicles or weapons, as well as the size of the group, would have been easily detectable by Government forces stationed at the Water Authority position. The commission therefore believes that access to the scene was not possible for any sizeable anti-Government armed group.

At the risk of sounding like a broken record, I want to re-emphasize my argument that war criminals are slowly but surely running out of time and space. I am convinced that important investigations such as the Commission of Inquiry on Syria, who conducted over a thousand interviews since it started its work last September, supplemented by new technologies to help the world see through the fog of war, will eventually lead to accountability for crimes committed.

2 thoughts on “UN Reveals Further Evidence of Atrocities in Syria”