Scene from a protest in Ukraine in late January of this year (Photo Credit: Alexandr Piliugun/Amnesty International).

Ukraine’s EuroMaydan protests started exactly three months ago today. Never before in my lifetime has the country witnessed such a neglect of human rights and dignity, such an appalling inability of the government to listen to its people and such incredible courage of ordinary people standing for their rights.

Late last year, when Amnesty International Ukraine was launching our first petition against police brutality and impunity, we could not have imagined the extent of abuses by law enforcement officers we would face in January and February 2014.

When violent clashes with the police broke out again on February 19, our office in Kyiv (Kiev) was forced to close amid the insecurity. I spent that night on the Maydan – the city’s central Independence Square and the epicenter of the protests – when the police moved in and made their third attempt to “cleanse” the area.

Most of the people who were shot on Maydan had wounds to their necks. I spoke to one of the doctors - he told me they had no chance of surviving those wounds and that they had clearly been shot by professionals intending to kill.

It felt like real war. As the barricades were being removed by the police, the protesters created a wall of fire around them, burning tires and “everything that burns,” including clothes.

There were around 5,000 people on the square, and every single person had a role. Some created lines to deliver stones and wheels to the front line, where young people were putting their lives on the line to save ours. I saw thousands of people, full of concentration, dignity and courage. Students, retired people, hipsters, Russian and Ukrainian speakers, academics and miners, from all over the country. I felt proud of them.

I was standing close to the main stage, when a rubber bullet hit my leg. As it had been fired from far away, I was not injured, and the pain only lasted for around five minutes. When I shouted “ouch,” the people around me turned, ready to help. They were not scared at all. After I told them I was okay, we all laughed together.

Two minutes later, one of the opposition leaders was injured with a rubber bullet, while speaking on the main stage. Whoever was shooting, was aiming at his face.

During the following day, February 20, fresh violence broke out on Maydan Square. In the course of the clashes, more than 60 people were reportedly shot dead by snipers. The protesters regained lost ground in the square and the police forces were pushed back. 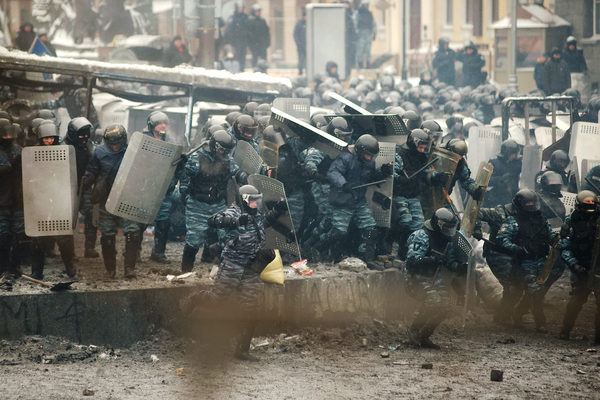 In the course of the clashes on January 20, 2014, more than 60 people were reportedly shot dead by snipers (Photo Credit: Maks Levin/LB.ua/Amnesty International).

Our team at Amnesty International Ukraine decided to donate blood, given the high number of casualties – we called at about five different places, but all of them were already full of people already giving blood and didn’t have enough capacity. Our names were put on the list for the next day.

The metro had been closed down on February 19, and many people left the city or chose not to leave their homes. However, the number of people at Maydan was constantly growing as buses and cars came to Kyiv from all over the country, trying to go around the checkpoints. I met some people from Zhytomir who walked for three hours in the woods to get to the city.

Most of the people who were shot on Maydan had wounds to their necks. I spoke to one of the doctors – he told me they had no chance of surviving those wounds and that they had clearly been shot by professionals intending to kill. Dozens of bodies were placed at the Maydan and in front of the city administration building. I saw men praying and crying near their dead friends. The total number of those killed is still unknown, but it is well over 70. I was looking through the list of the dead hoping not to find anyone I knew.

I didn’t, but many people were not so lucky.

To see updates on the Kiev protests in real time, watch:

Zoryan Kis stayed overnight in Kyiv’s central Maydan Square on February 19th, during the deadliest period of the recent protests. Clashes that erupted on February 19th and 20th have resulted in the deaths of in excess of 70 protesters and at least 20 police officers.