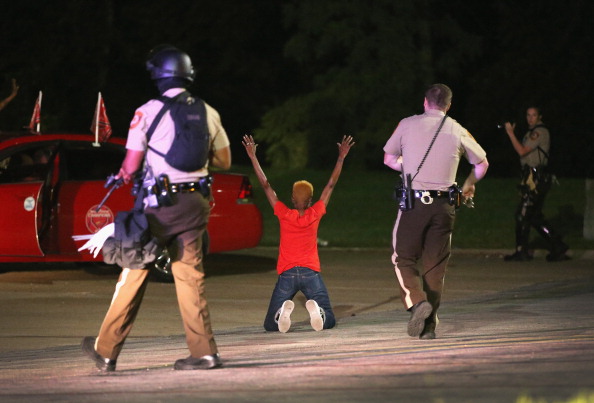 There must be change, or else we will ensure that there will be more victims of unnecessary and excessive use of force by police. There must be justice.

While there are conflicting reports of what happened between 18-year-old Michael Brown and a police officer last Saturday in Missouri, while Americans watch anxiously as yet another community is ripped apart by the killing of a young black man by police, this much remains uncontested: Brown was unarmed when the as-yet unnamed officer shot and killed him.

His death followed closely that of a Staten Island father of six, Eric Garner, who was killed last month when an NYPD police officer placed him in an illegal choke hold.

The FBI and U.S. Justice Department’s Civil Rights Division have opened an investigation into Brown’s death parallel to the St. Louis County Police Department, even as multiple local law enforcement agencies have turned Ferguson’s nights into something resembling a war zone.

The FBI is also actively monitoring the investigation into Garner’s death, and several members of Congress have requested a federal inquiry as tensions remain high in New York.

These are good first steps at monitoring, but they are nowhere near enough to prevent abuses in law enforcement. How do we ensure this never happens again? How do we guarantee that no other mother will hear gunshots a block away, only to run and find her son or daughter laying unarmed at the feet of a police officer? That no father is held down by police until the life is choked out of him?

There must be change, or else we will ensure that there will be more victims of unnecessary and excessive use of force by police.

”
The U.S. cannot continue to allow those duty-bound to protect its citizens – the FBI, state and local police, anyone – to become that which their community fears most.

First, when use of force by the police has resulted in injury or death, a prompt, thorough, independent and truly impartial investigation must be conducted. Additionally, all officers responsible for abuses should be adequately disciplined and, where appropriate, prosecuted.

It is also imperative that both the Ferguson and New York police departments conduct mandatory retraining on the use of force – especially the use of deadly force. There can be no ambiguity about when a police officer is allowed to take a life.

And right now, there is nothing but ambiguity in the death of Michael Brown. There is secrecy.

Some will remember when, in the early ’90s, it became public that the Chicago Police Department, under the command of Jon Burge, had tortured over 100 people of color – mostly African-American men – systemically over the course of decades.

The survivors of this brutality describe beatings and electric shocks, as well as having plastic bags pulled over their heads and threatened with mock executions. The subsequent forced confessions resulted in many individuals being sentenced to severe prison terms or, in some cases, death.

Burge was convicted of perjury and obstruction of justice, but neither he nor any of the detectives he supervised have, to this day, been prosecuted for their actions.

Our courts rarely impose serious penalties on law enforcement officers caught in even the most egregious violations of individuals’ rights. Our investigations of white police officers killing young black men too infrequently lead to independent conclusions. It’s ironic the United Nations is reviewing the entire country’s record on racial discrimination this week.

Thursday’s national moment of silence marks two deaths that have rightly reignited a national conversation about police brutality. Let’s get loud, because now is the time for decisive action to end unnecessary and excessive force by police. Now is the time for this land to close its divide.

We must make clear to authorities at the federal state and local level – and to the rest of the world – that we won’t stand for the death of one more black man at the hands of police.

4 thoughts on “When Will We See Justice for Michael Brown?”