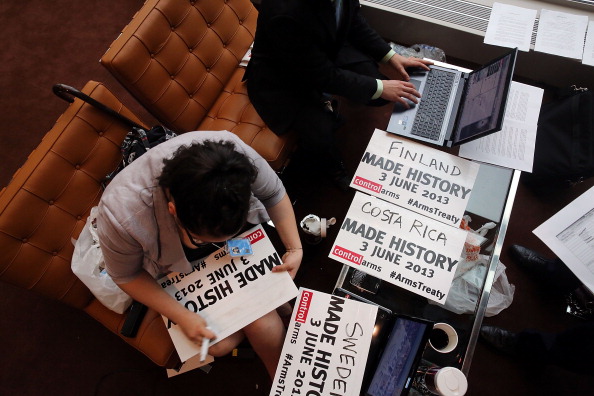 Campaigners with Control Arms fill out placards for an internet campaign with the names of the countries that have signed the Arms Trade Treaty (Photo Credit: Spencer Platt/Getty Images).

Today, states from around the globe gathered at the United Nations headquarters in New York City to commit themselves to ending the flow of arms to human rights abusers, war criminals and conflict zones by signing the historic Arms Trade Treaty. A total of 62 nations have taken the opportunity to sign on the first possible day, a strong showing of global support.

While the United States was not among the signatories today, a statement from Secretary of State John Kerry has signaled strong support for the treaty, saying the U.S. intends to sign it soon and calling it “an important contribution to efforts to stem the illicit trade in conventional weapons, which fuels conflict, empowers violent extremists, and contributes to violations of human rights.”

While all indicators seem positive at this stage, it’s critical that the grassroots movement maintain pressure on the administration. Click here to send an email to President Obama urging him to sign the treaty as soon as possible and work toward ratification.

Most U.S. arms export laws are already in compliance with the Arms Trade Treaty, representing a strong example for responsible export regulation. However, signature by the world’s largest arms exporter would carry great weight in the international sphere, placing moral and political pressure on remaining states to sign. That’s why it’s critical that President Obama sign the Arms Trade Treaty as soon as possible.

One thought on “What the U.S.’s Signature Would Mean to the U.N. Arms Trade Treaty”