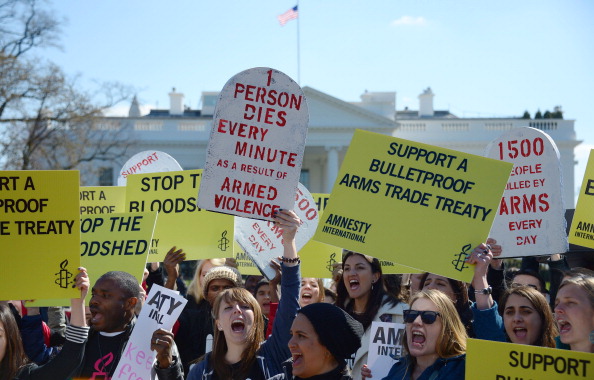 2. Raises Human Rights Standards – for Everyone

The ATT asserts the principle, already enshrined in US law, that states have an obligation to weigh the human rights implications of a proposed arms transaction before authorizing a weapons export. This provision helps level the playing field among weapons suppliers, by applying the same high standard across the board to all would be exporters. It removes the argument that says “someone else with sell weapons to them if we don’t.”

The ATT explicitly recognizes that civilians bear the main burden of armed violence, and it requires exporting countries to assess the risks that the weapons they propose to supply will be used to commit or facilitate violence against civilians or gender-based violence.

The ATT is the first treaty to address the global supply of Small Arms and Light Weapons (SALW). This will help curb the proliferation of these weapons, (including the notorious AK-47), which are widely considered by human rights groups to be the true “weapons of mass destruction.”

The comprehensive nature of the treaty – covering transportation and transit as well as brokering – will help prevent diversion of lawfully supplied weapons to the black market.

6. Makes it Harder for Criminals and Human Rights Abusers to Get Weapons

Armed groups, including those responsible for acts of terrorism and other abuses, and criminal gangs will have a harder time getting their hands on weapons, because the ATT requires states to take measures to prevent diversion of weapons from their intended end user.

7. Makes it Harder for Warlords and Armed Groups to Get Weapons

The ATT requires exporting states to assess the risk that weapons will be used for human rights violations, including the forced recruitment of child soldiers. This will make it more difficult for warlords who steal the childhoods of thousands in Africa and around the world to get their hands on weapons.

8. Outlaws the Most Egregious Arms Transfers

The ATT prohibits transfers to those who will use them to commit atrocities, including crimes against humanity, attacks against civilians, rape as a war crime and other grave violations of international law. Making this principle explicit and legally binding is a critical step in protecting civilians from attack.

The ATT will make it harder for weapons traffickers to profit from conflict by funneling arms to warlords who terrorize civilians. It will significantly raise the cost of making irresponsible transfers, reducing or even removing the profit motive from those who care only about money.

10. Keeps States from Pouring Gas on the Fire

The ATT will help keep states from pouring weapons into conflict zones, making bad situations far more violent and deadly for their own political ends. States will be more politically accountable for their arms transfer decisions, making it less likely they will fuel a conflict to advance their agenda.

The ATT creates a mechanism to financially support the implementation of arms export control systems in poor countries, helping authorities in these countries prevent weapons from going to those who would use them irresponsibly.

The ATT will encourage a harmonization of laws among exporting states, making it more difficult for unscrupulous arms dealers to slip away from prosecution.

13. Walking the Talk Allows US to Set the Example for Other Exporters

It is the right thing to do and an issue on which the US should be a leader. The United States is the world’s largest arms exporter. It also currently has the strongest export controls. Having the ATT come into force, with the US leading the way, will challenge other major exporters to sign and end the irresponsible and illegal global arms trade.

One thought on “Thirteen Reasons for Obama to Sign the Arms Trade Treaty, Five Days Before the Signing Date!”