Repeal of the death penalty is another piece of this movement that cannot be divorced from this struggle for Black Lives.

SB 40, a bill to repeal the death penalty, was introduced and passed in the Delaware State Senate in 2015. The bill was stuck in the House Judiciary Committee for several months when in January 21, 2016 the bill was suddenly and unfavorably signed out of the Judiciary Committee by Rep. Mitchell and scheduled for a floor vote one week later. On January 28, 2016 the Delaware legislature had a chance to make history, but in the end the House voted 16-23 against the bill.

As a community organizer within this movement, I continuously hear, “Why this and why now?” The reality is that the death penalty is an issue that greatly affects the African American community, and if we ignore that fact we are ignoring the reality of the glaring injustice present in the death penalty and by extension, our criminal justice system. How effective would we be as a movement if we are not inclusive of the communities that are most affected by this measure of injustice? Recently, the Delaware Repeal Project has shifted our grassroots strategy so it is more inclusive and empowering to communities of color. As abolitionists were preparing for this historic vote, African American leaders came together in Dover to call on the legislature to understand the morality of this vote and recognize the racism present within the death penalty. Despite a disappointing vote, last week in Dover shows us the power present in this new and more diverse coalition. News stories after the vote now point to Delaware repealing the death penalty as inevitable, and legislators are busy explaining their vote – this is evidence of the strength of Delaware’s Black community.

I want to break down the death penalty’s race problem a little bit more. The Death Penalty Information Center reports that in 96% of states there has been a pattern of discrimination based on the race of the victim or the race of the defendant.1 The reality is that a defendant is more likely to get the death penalty if the victim is white as opposed to any other race, and much more likely to be sentenced to death if the defendant is a person of color that has killed a white individual. To further this point, it has been reported that over 75% of murder cases that have resulted in an execution had a white victim, while only 50% of murder victims are white.2 Often, people tend to justify the use of the death penalty by expressing feelings of vengeance and retaliation. Yet, statistics would suggest that people become more outraged at the death of a white individual, and they are more readily eager to execute and take the life a black individual over a white individual that has taken the life of a black person. Our criminal justice system is again saying that African Americans are expendable in the eyes of the law. This makes it resoundingly clear that the phrase, “Black Lives Matter,” must be reiterated within this struggle to end the death penalty. Ending the death penalty would be a small step toward dismantling the racism present within our criminal justice system. 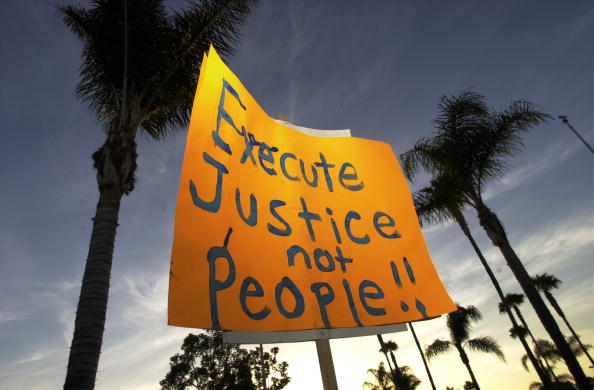 Delaware’s government officials have constantly claimed that it is a forward-thinking state.  Many politicians and government officials would pride themselves on “the First State” being a state that is upwardly mobile and forward thinking. It could be said, however, that it is a state that is far behind when it comes to issues of race and racism, which is evident in the way that the state carries out practices within the criminal justice system. Delaware is one of the few states in which over 70% of the people on death row are people of color, while people of color only make up about 30% of Delaware’s population.3  In a hearing before the Senate Judiciary Committee, Chief Jeffrey Horvath of the Lewes Police Department suggested that these statistics are not a problem because a majority of homicides on Delaware are committed by blacks. 4 This statement fails to acknowledge how the criminal justice system targets African Americans at all levels, and how it has been erected out of a foundation formed in white supremacist and racist ideologies. One look at our prisons and jails confirms that racism exists at every stage of the criminal justice system. Delaware is no exception. The belief that African Americans are inherently violent, and the racial injustice that follows from such thinking, is evident beginning with how police choose to engage with people of color on the street, to choices as to whom to arrest, to decisions about charges, to selection of the jury, to the use of racist language in trials, and to ultimate decisions in charging and sentencing.

It is my belief that legislators ignored the requests of African American leaders and community members, or as least were of the mindset that our concerns could wait. This historic vote came about a week after the House had passed a resolution that would apologize for slavery. The fact remains that legislators are willing to create appearances that they seek progressive change by apologizing for slavery, yet fail to take action to dismantle the racism that has formed as a result of the slavery. The time has ended for legislators to ignore our concerns of African Americans. We live to continue to the fight of ending the death penalty another day. I hope you’ll join us.

3 thoughts on “Death penalty repeal: if not now, when?”