Sting, Roger Waters and a growing number of artists and activists are joining Amnesty International activists like you who are raising their voices to help free Pussy Riot.

All over the world, freedom-loving people are deeply troubled that Masha Alekhina and Nadya Tolokonnikova of the Russian punk band Pussy Riot are still in prison.  A Russian appeals court failed to overturn their sentence in October despite a global outcry calling for their acquittal. 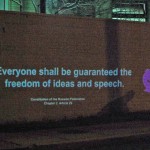 Russian President Vladimir Putin didn’t like the song they performed. And, on top of that, despite the fact that last week was Russian Constitution Day—a constitution that guarantees the right to free expression, mind you, officials are shutting down free speech all across Russia – and getting away with it.

Pussy Riot’s case connects the worlds of music and human rights.  When you add yourself to the Free Pussy Riot Map – Amnesty International’s newest human rights project for solidarity, you help deepen that connection.

When asked how he felt about Pussy Riot’s case, Sting had this to say: “Dissent is a legitimate and essential right in any democracy and modern politicians must accept this fact with tolerance.”

Take a look for yourself and see how many other musicians have already been inspired to speak out on Pussy Riot’s behalf including Roger Waters, members of Pearl Jam and Madonna.  There’s no better time than now, a season when we reflect back on the year and imagine what the future can be, to unite with others who speak out on behalf of those whose voices have been muted.

Get on the Free Pussy Riot Map!  We will share all entries with members of Pussy Riot.  We want them to know that we are still standing up and speaking out for their rights to be recognized.

Pussy Riot was one of this year’s signature Write #4Rights cases because their case so clearly illustrates the value of free speech and expression.  Their sentences – two years each in a penal colony for performing a 40-second protest song – are inhumane.

It doesn’t matter if you’re punk rocker or not — if you care about justice, then you should raise your voice for Pussy Riot.  Join me, Sting and the growing number of artists and activists by adding yourself to the map!

One thought on “Get On the Map!”