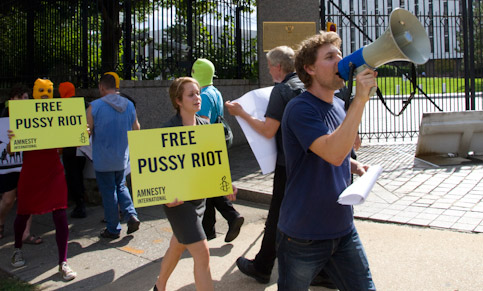 Amnesty activists protest in front of the Russian Embassy in Washington, DC on July 27, 2012. Photo by Michael Fairchild.

Yesterday, the trial of three members of the Russian feminist rock group “Pussy Riot” began in Moscow. Maria Alekhina, Ekaterina Samutsevich and Nadezhda Tolokonnikova were arrested in March, accused of “hooliganism on the grounds of religious hate” for performing a protest song entitled ‘Virgin Mary, redeem us of Putin’ in Christ the Savior Cathedral in Moscow.

The young women face charges that could result in up to seven years imprisonment.

Yet in the words of John Dalhuisen, Amnesty’s Europe and Central Asia Program Director, “this trial should never have taken place” and it is “clearly politically motivated.” The women “dared to attack the two pillars of modern Russian establishment – the Kremlin and the Orthodox Church. While many may have found their act offensive, the sentence of up to seven years in prison they may expect on the charges of hooliganism is wildly out of all proportion.”

Lured by a provocative name and stunning visuals of the band’s impromptu performances on the outskirts of Red Square, the Internet has been abuzz about the women’s case. Pussy Riot’s fellow musicians have also shown their solidarity. During recent concerts in Russia, rockers Sting, Red Hot Chili Peppers and Franz Ferdinand all called on the Russian authorities to free Pussy Riot and respect freedom of expression. And if they can’t do it live in concert in Russia, musicians are spreading the word to Amnesty’s online action through social media.

But activism to free Pussy Riot isn’t just taking place online. On Friday, Amnesty activists took the Pussy Riot case to the streets of Washington, DC and New York. At the Russian consulate in New York, Amnesty International USA’s Executive Director Suzanne Nossel called on Russia to release the women, deemed prisoners of conscience. And in Washington, DC, more than a hundred Pussy Riot proponents came out for a lively demonstration in front of the Russian Embassy – so many people, in fact, that police briefly closed Wisconsin Avenue so that protestors could march to a larger space across the street!

The incarceration of the three young women of Pussy Riot, along with President Putin’s recent efforts to crack down on the independence of NGOs and today’s charges of embezzlement against blogger and opposition activist Alexey Navalny, demonstrates a troubling shift in Russia toward a more repressive and intolerant society. If President Putin and his cronies successfully carry out this aggressive assault on freedom of expression and the due process rights of these young women, it will embolden governments all around the world that would use censorship and illegitimate detention to suppress the voice of the people.

The women’s trial continues today, and you can follow a live text transcript of the proceedings here. The Russian authorities need to know that we’re watching their shameful denial of Pussy Riot’s free speech rights. If you haven’t already, take action demanding that the Russian authorities free Pussy Riot, immediately and unconditionally.