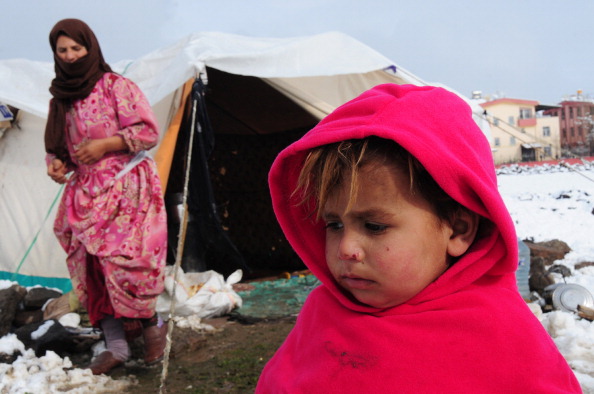 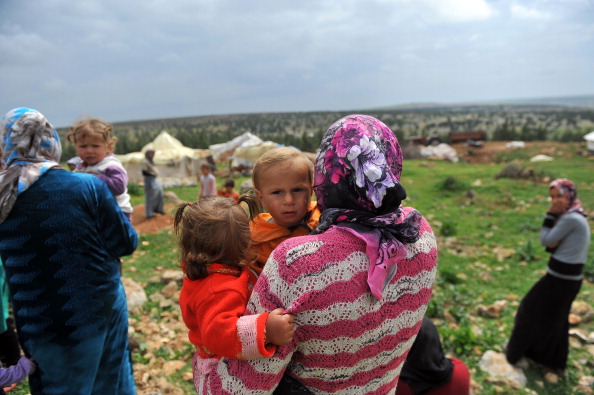 A Syrian woman carries her children near their makeshift refugee camp on the Syria-Turkey border (Photo Credit: Bulent Kilic/AFP/Getty Images).

A young mother of five children told us:

“When we got here we found that it was impossible to cross into Turkey because the border is closed. So we’ve been stuck here with nothing. There is little food, we don’t even have clothes and blankets to keep warm, we can’t keep the rain out, and everything is wet. The children get sick all the time. The world has forgotten us. What will become of us?”

Her family’s story is indicative of the dire situation facing many of the over 6 million people who have been displaced by the conflict in Syria – while death and destruction continue on a daily basis. A Syrian boy in a newly built refugee camp at the village of Qah, near the Turkish border, which is under the control of rebel fighters (Photo Credit: AFP/Getty Images).

Amnesty is increasing our efforts to advocate on behalf of refugees and displaced civilians who have struggled to carry on amid the violence. In the face of this mounting crisis, Amnesty is pressuring the international community to provide aid to people inside Syria and to give urgently needed financial assistance to support refugee-related efforts made by Syria’s neighboring countries. You can help families in Syria and around the world.

We rely on people like you to support our actions to provide hope for the people of Syria and people everywhere who face violence and government oppression. Please make an urgent donation to Amnesty so we can continue to help families suffering human rights violations in Syria and around the world. A volunteer shares out food to the people in the Bab al-Salam refugee camp for displaced Syrians near the border with Turkey (Photo Credit: JM Lopez/AFP/Getty Images).

5 thoughts on ““The World Has Forgotten Us”: Syrian Mother Speaks”