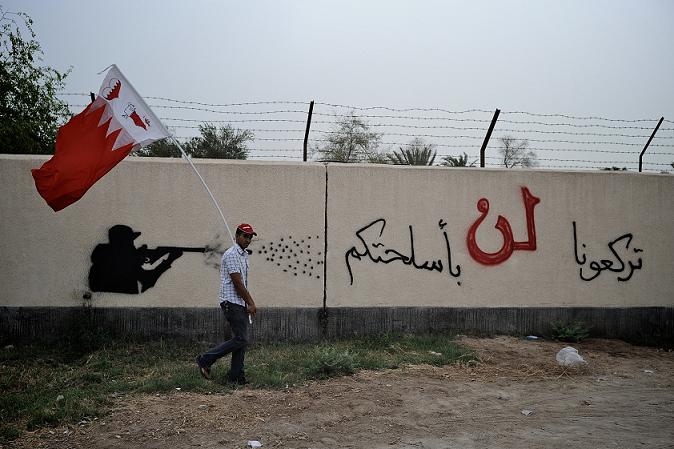 In a briefing with reporters, unnamed “senior administration officials” reinforced that message:

The items that we are moving forward with are those that are not typically used for crowd control and we would not anticipate would be used against protestors in any scenario. But sales of items that are sort of predominantly or typically used by police and other security forces for internal security, things used for crowd control, we’re not moving forward with at this time. That would include things like tear gas, tear gas launchers, stun grenades – those sorts of things.

However, when asked by a reporter to specify exactly what arms and military equipment will and won’t be shipped to Bahrain, the officials declined to state definitive details.  They also declined to share what the total value of the arms shipments will be.  The items they did mention being shipped to Bahrain were “excess harbor security boats for the Coast Guard and support for an upgrade for Bahrain’s existing turbo fan engines, which are used in F-16s.”

Unfortunately, an incomplete list is not much better than no list at all.  Such secrecy poses serious problems, because we don’t know what the arms shipments might mean in the context of potentially escalating protests.  Blocking tear gas shipments is a good thing, as is the blocking of Humvees that could be used to transport Bahraini security forces to public protests.  But if we don’t know the full list of what is being sent to Bahrain, it is difficult to independently ascertain whether or not the military arms and equipment being provided truly can’t be used against protestors.

Since protests began on February 25th of 2011, Bahrain security forces have used vehicles to transport the personnel involved in government crackdowns.  Not only that, but Bahraini security forces even used tanks to surround a hospital where doctors were treating wounded protestors.   If there is substantial risk that the Bahraini government could use new US arms to violate human rights, then those shipments should never leave US shores.

Protests in Bahrain are continuing, with today’s latest round involving tens of thousands of Bahrainis.   The latest protests are in opposition to a proposal to bring Bahrain and its major neighbor, Saudi Arabia, into a closer political union.  The Saudi monarchy has advocated for this and is thought to be opposed to political reforms in Bahrain that might fuel similar demands for change at home.  On March 25th of last year, the Saudi government even sent some 1,200 troops into Bahrain on the same day the King of Bahrain reacted to public protests with a state of emergency.

It is difficult to predict where the future lies for Bahrain.  The government has failed to hold itself accountable for ongoing violations of human rights.  Protestors continue to oppose many government policies, and in some cases, have reacted with violence.  And to make matters worse, the US is continuing secretive weapons sales to the Bahraini monarchy.

3 thoughts on “Another US Arms Shipment to Bahrain”