Since 2011, more than half of the Syrian population has been on the run, fleeing their homes to escape war crimes and human rights abuses by both the Assad regime and armed opposition groups such as the Islamic State.

But the more than 4 million Syrian refugees can no longer escape the threat from another source: the neglect of world leaders that is condemning them to a life of misery and danger.

With humanitarian aid falling far short of both what is needed and what has been pledged, Syrian refugees in Lebanon are living on an average of $19 a month. Countries around the world have shut their doors or thrown up obstacles to resettlement, placing additional pressures on the five countries that now house 95 percent of the Syrian refugees.

The refugees themselves are left with no good options. There’s Samir, a 41-year-old Syrian refugee living in an informal refugee tent community in Lebanon. Samir fled Lebanon after the death of his brother. Two other siblings are believed to be dead as well. He can’t go back to Syria, but he told Amnesty International researchers that his most pressing risk comes from new repressive measures in Lebanon threatening his legal status.

“I will probably get arrested in Lebanon,” Samir said. His name is changed to protect him from legal harassment. “We ran away from death in Syria to slowly die in Lebanon.”

A new Amnesty International report looks at the “conspiracy of neglect” that is turning the global refugee problem into a crisis. The report highlights eight recommendations, from fulfilling resettlement requests from the UN refugee agency to establishing a sustainable global refugee fund to support countries that are taking on the burden of the crisis. 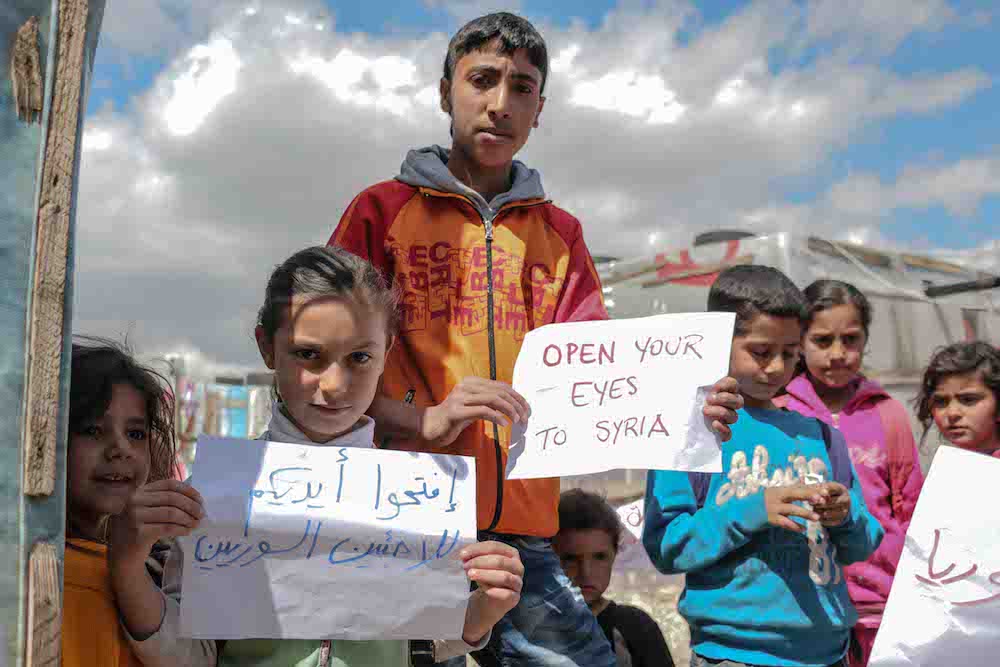 Images taken during a visit to an informal settlement in Bekaa Valley, Lebanon in March 2015. Photos with women and children who made their own ‘Are you open to Syria’ & Open To Syria cards for the #OpenToSyria campaign.

The report is grim in its documentation and in its assessment of success. Around the world, Amnesty International is reporting an increase of xenophobia and passage of repressive measures that restrict the legal status of refugees and reduce their abilities to economic and educational opportunities. What is needed, the report said, is nothing less than a paradigm shift that puts a commitment to saving lives first.

The burgeoning Syrian refugee camps provide the strongest evidence of this neglect. Amnesty International researchers were recently in several of the largest camps hearing the stories of the refugees trapped between human rights abuses at home and growing hostility in their new countries.

It’s clear that the refugees can’t return home anytime soon. It’s just as clear that the five countries – Lebanon, Turkey, Iraq, Jordan and Egypt – have taken on a tremendous burden in opening their borders to the four million refugees.

But with only 23 percent of the international aid pledged actually being funded, the host countries are at the breaking point, and they’re responding with onerous restrictions. For example, in January 2015, Lebanon introduced new criteria for Syrian nationals that are so expensive that many people are unable to renew their permits. Without the permits, refugees are left in a precarious legal position, exposing them to a range of human rights violations, limiting or eliminating their access to education and healthcare and putting them at risk for detention by security forces or deportation to Syria.

The increasing desperate Syrian refugees are taking matters into their own hands. In the first three months of 2015, Syrians represented the largest proportion of people risking their lives to cross the Mediterranean by boat to reach Europe. For many, the trip ends in death.

Mahmoud, a 20 year-old Syrian refugee from Aleppo, one of the major cities that has suffered catastrophic civilian damage from both opposition groups and the Assad regime, was on one such boat. “Until now, I hear the voices of children and women screaming in the water,” Mahmoud told Amnesty International researchers. “I see the moment when the boat flipped over in front of my eyes.”

What Samir and Mahmoud need are policies that recognize them as refugees, fleeing not only armed conflict in [in this case] Syria, but dire deprivation and serious human rights violations.

Instead, they are being treated as criminals. Later this month, a U.S. House of Representatives subcommittee will hold a hearing on: “Admitting Syrian Refugees: The Intelligence Void and the Emerging Homeland Security Threat.”

Simply, this constitutes a failure of the international community, and a spectacular failure at that. The United States, like the rest of the world, is guilty of neglect and more fear-mongering will only make it worse. The paradigm change should start now with a stronger commitment to Syrian resettlement.