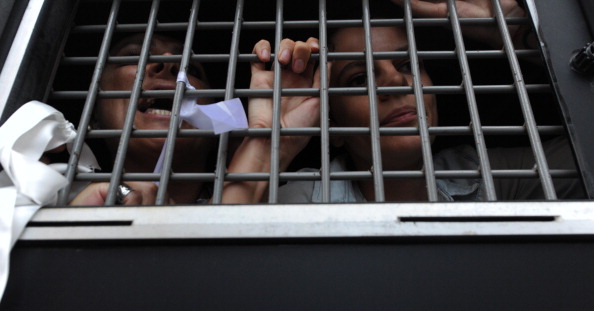 Since Putin was re-elected, Russians have witnessed a further erosion of their rights (Photo Credit: Vasily Maximov/AFP/Getty Images).

When a government cracks down on human rights, the rule of law is degraded.

On Oct. 7, Amnesty International USA and the law firm of Kirkland & Ellis hosted a discussion with Daniel Feldman and Pavel Ivlev about the erosion of rights in Russia and the impact it has on the legal fabric of Russian society.

Both men worked with Mikhail Khodorkovsky, an Amnesty prisoner of conscience, who was once one of Russia’s most successful businessmen and CEO of Yukos Oil Company.

Today is the ten year anniversary of Khodorkovsky’s arrest. He was charged with fraud and later sentenced to twelve years’ imprisonment. Amnesty International expressed grave concerns over the timing of the charges filed against him, the harassment of lawyers and witnesses during the trial and procedural violations including the exclusion of evidence that might have exonerated him.

In other words, Khodorkovsky’s right to a fair trial, as guaranteed under the Russian Constitution and international law, was impeded and his case reveals a flawed justice system that can prioritize politics over due process. 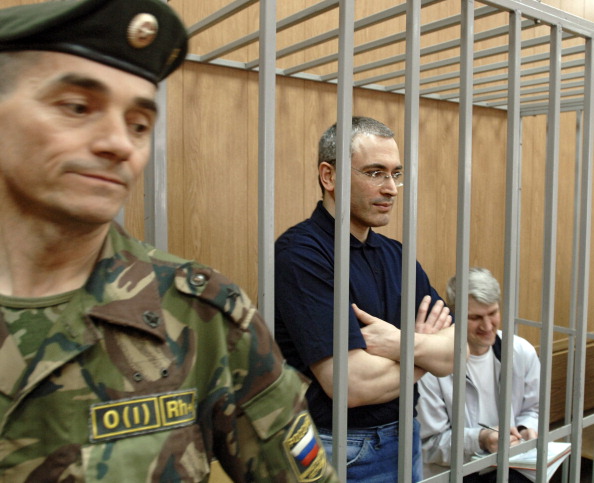 Mikhail Khodorkovsky during his sentencing in 2005 (Photo Credit: Sovfoto/UIG via Getty Images).

Both of our panelists worked with Khodorkovsky. Feldman was the former Corporate Secretary of Yukos Oil Company and Ivlev was its long-time legal counsel. Until 2003, Yukos was one of Russia’s most profitable petroleum companies created after the privatization of the then state-controlled oil infrastructure. The company is now defunct after Russia imposed a heavy tax re-assessment on it, while simultaneously freezing its assets, thereby making it difficult to satisfy these new liabilities. The company’s holdings were subsequently sold back to oil companies owned by the Russian government.

Both panelists elaborated on the uncertainties they faced practicing law in Russia and utilized their experiences with Yukos to highlight the unpredictability of the Russian legal system. These challenges included high levels of corruption within the police and justice system, the inability to enforce contracts, and being at the mercy of power-wielding bureaucrats who represented an omnipotent State’s will above the rule of law. Their experiences exemplify the Russian Government’s ability to topple a once powerful and profitable company due, in part, to a basic disregard for private property rights.

Since Vladimir Putin was re-elected to his third term as President of the Russian Federation last year, Russians have witnessed a further erosion of their rights, and face real threats should they attempt to speak out against obtrusive State action. In addition, lawyers and human rights defenders who complain about law enforcement misconduct, or challenge the lack of due process their clients face, have themselves been targeted, harassed, and threatened.

Sapiyat Magomedova and Magamed Abubakarov are just two lawyers of many who experience pressure just for trying to do their job. They represent people in the North Caucuses of Russia who have been accused of security violations. Both lawyers have accused the state of violating due process and preventing evidence that their clients may be tortured by the authorities.

Felmdan, Ivlev, Magomedova and Abubakarov have different legal practices, but they all share the experience of being denied the ability to practice law to uphold rights and freedoms – whether that is the ability to enter into enforceable commercial contracts, or defend the rights of those accused of crimes. This selective enforcement of laws and arbitrary expression of State power fosters an atmosphere that erodes the rule of law for all.

As tracked by Amnesty USA’s interactive timeline Russian authorities have arrested over 5,000 protesters since Vladimir Putin declared that he would seek an unprecedented third presidential term. Many Russians are demanding transparency, fairness and an unencumbered ability to peacefully petition their government. The ability of lawyers to practice without fear of intimidation is a crucial ingredient to realize these basic freedoms. When a state overreaches and attempts to curtail these freedoms, either at the individual level or society-wide, it is the legal community that can be one of the first lines of defense.