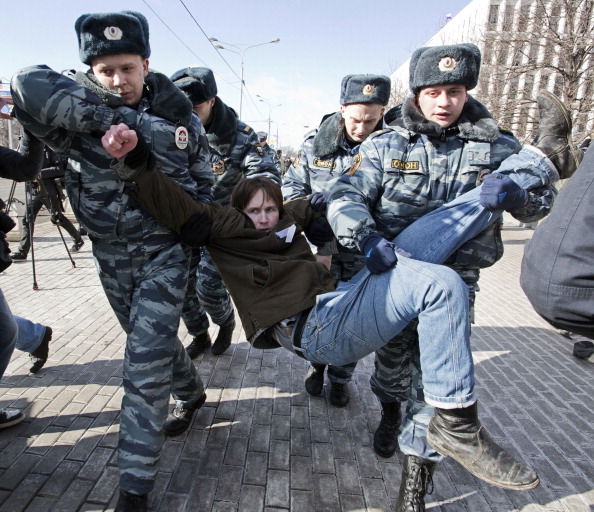 This blog originally appeared on Fem 2.0

A lot has changed in Russia since I visited Moscow in 1985.

It was an exciting time for citizens of the Soviet Union. Mikhail Gorbachev had just taken over as the General Secretary of the Communist Party and introduced “Glasnost” or openness to a people who had for years lived under the dictates of a repressive government. Glasnost started a transformation in Soviet society and awoke long dormant aspirations of cultural, civil, and political freedoms.

The ensuing three decades were turbulent to say the least, but resulted in Russians enjoying and exercising greater freedoms, including the key ability to have a say in their own governance.

Things are quite different now in Russia. Any remnants of Glasnost are quickly disappearing as once again the state, under Vladimir Putin’s leadership, is cracking down on basic liberties.

Oppression thrives in silence - so Amnesty activists, artists, and musicians will make their voices heard in the call for Russian authorities to respect human rights in Russia.

”
A vivid exemplar of this regression to repression has been the persecution of members of the feminist punk rock band Pussy Riot who have been imprisoned for their peaceful protest against the re-election of Vladimir Putin and the increased alignment of a conservative patriarchal Orthodox Church with the Russian state.

In March last year, Vladimir Putin won his third presidential election. He claimed a landslide victory that returned him to the presidency after a brief handover to his hand-picked deputy.

Putin’s election fueled protests throughout the Russian Federation and his administration’s response to the protest movement has been almost entirely repressive. Amnesty International has documented that from December 2011 to December 2012 at least 5,100 protestors have been arrested in more than 220 protest gatherings.

Through administrative and legal changes, Putin has severely curtailed the rights to freedom of expression, association and assembly. The rights of political opponents, human rights organizations and activists, and all Russian citizens wishing to raise their voice in protest have been curtailed. New legislation restricts the activities of non-governmental organizations, criminalizes public actions “committed to insult the religious feelings of believers” and outlaws activism by lesbian, gay, bisexual, and transgender (LGBT) individuals and their supporters in many parts of the country.

Notwithstanding persecution and the threat of arrest, citizens continue to advocate for greater rights that are explicitly guaranteed to them by the Russian Constitution. One of the jailed members of ‘Pussy Riot,’ Nadezhda Tolokonnikova, looks on while standing in the defendant’s cage in a court in the town of Zubova Polyana (Photo Credit: Maksim Blinov/AFP/Getty Images).

It is in this context that the trial of the Russian feminist punk rock band Pussy Riot unfolded.

On February 21, 2012, in anticipation of Putin’s imminent reelection band members performed a protest song entitled, “Virgin Mary, Redeem Us of Putin,” at Moscow’s main Orthodox Cathedral. The song calls on the Virgin Mary to become a feminist and banish Vladimir Putin. It also criticizes the support shown to Putin by some representatives of the Russian Orthodox Church. During the performance, the singer’s faces were covered in balaclavas to protect their identities.

Within weeks, band members Maria “Masha” Alyokhina, Nadezhda “Nadya” Tolokonnikova and Katya Samutsevich were arrested in connection with the February 21st performance and charged with “hooliganism to incite religious hatred” under Article 213 of the Russian Criminal Code. Although Katya was later released on appeal, Masha and Nadya remain imprisoned on two-year sentences in harsh prison colonies.

The band and its members embody the continued struggle of ordinary Russians to demand respect for their basic human rights and the freedom to peacefully petition their own government. Their persecution has generated outrage worldwide: Close to 100,000 people have sent letters to the Russian Federation demanding Masha and Nadya’s immediate release. More than 100 internationally renowned musicians, including Adele, U2, Madonna, Radiohead, and Sir Paul McCartney, have also joined this worldwide call. You too can join this movement.

You can take action online and if you are in Washington, D.C. on August 16, join us at our second annual punk rock concert to show solidarity with the members of Pussy Riot at 6 p.m. opposite the Embassy of the Russian Federation. Like thousands of other Russians, Nadya and Masha have been deprived of their freedom for daring to engage in peaceful protest.

Oppression thrives in silence – so Amnesty activists, artists, and musicians will make their voices heard in the call for Russian authorities to free Pussy Riot and respect human rights in Russia.

I hope you can join us as we demand justice for Masha, Nadya and the many others for whom Glasnost has just become a distant fairy tale.

One thought on “Protesting the Regression to Repression in Russia”