President Tayyip Erdogan has called for expanding Turkey‘s already overbroad anti-terror statutes.  “Their titles as an MP, an academic, an author, a journalist do not change the fact that they are actually terrorists,” Erdogan said “It’s not only the person who pulls the trigger, but those who made that possible who should also be defined as terrorists…. There was no difference between a terrorist holding a gun or a bomb and those who use their position and pen to serve the aims.” Freedom of expression, already besieged in Turkey, is facing the possibility of even greater repression to come.

The continued harassment and prosecution of academics who signed a “peace petition” is one obvious example of Turkey’s campaign against dissent.  Amnesty condemned these prosecutions in January, saying it represented “a new assault on the imperiled right to freedom of expression.”

Placing the arrests in the context of on-going operations in south eastern Turkey, Andrew Gardner, Amnesty International’s Turkey researcher, noted “The military operations taking place under round-the-clock curfews are generating huge suffering and widespread human rights violations. The Turkish authorities should be listening to those that are speaking out, not arresting them.”

The detention and harassment of these academics is an ominous marker of the precarious state of human rights in Turkey. They have as much right as anyone else to exercise their right to freedom of expression, without being branded as terrorists and menaced with arrest.

These detentions, coupled with President Erdoğan’s remarks, suggest that the crackdown in the Kurdish south-east is being extended to anyone who dares criticise government operations.

We urge the Turkish authorities to stop rounding up academics who speak their mind, drop the investigations against them and ensure their safety. Their treatment is a stain on Turkey’s conscience.

The campaign escalated in March, after four of the signatories, Muzaffer Kaya, Esra Mungan, Kıvanç Ersoy and Meral Camcı renewed their call for peace and condemned the harassment of academics who had signed the petition, on behalf of all the signatories to the original statement. Subsequently, the Istanbul Chief Prosecutor opened a new separate investigation accusing the four academics of ‘‘making propaganda for a terrorist organisation’’.

On March 15, the court granted the prosecutor’s request that Muzaffer Kaya, Esra Mungan and Kıvanç Ersoy be remanded in pre-trial detention. Without a hint of irony, the court argued that because the signatories did not condemn the PKK, “the defendants in reality support the actions of the terrorist organisation.”

On March 31, President Erdoğan was defending Turkey’s record of free speech at the Brookings Institute in Washington, DC. Before the talk, according to Kemal Kirişci, a Turkey expert at Brookings, “[Erdoğan‘s security detail] picked fist fights with demonstrators and attempted to evict Turkish journalists.”

While I was watching the live stream of Erdoğan‘s Brookings speech, I received news via twitter that Meral Camcı who returned to Turkey the previous day, had been remanded in pre-trial detention in Bakırköy women’s prison in Istanbul along with Esra Mungan. The gap between Erdoğan’s defense of Turkey’s record in Washington and the actions of Turkish authorities could not have been more palpable. 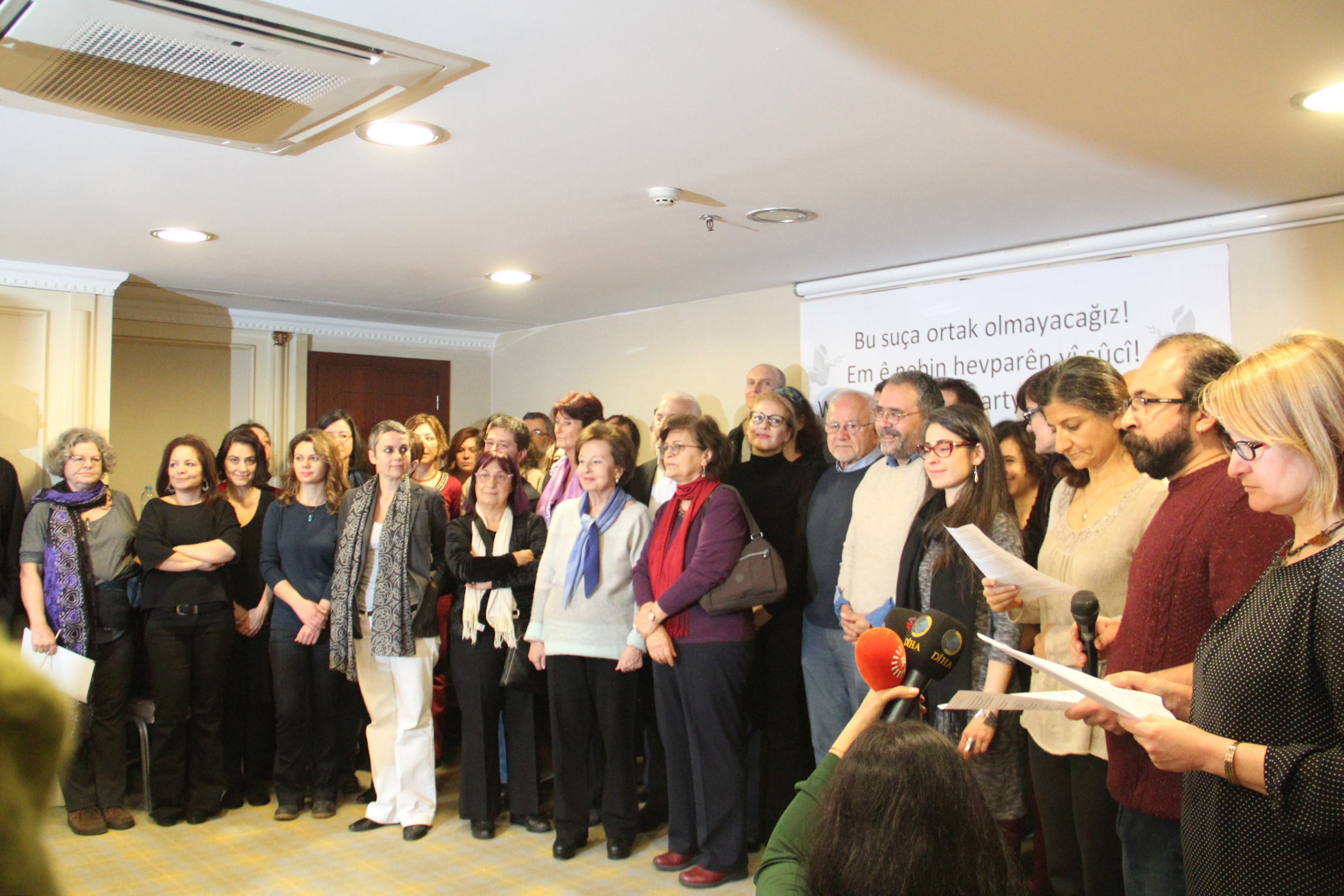 The photo is from the press conference that took place on 11 January 2016, announcing the peace appeal by 1,128 academics.

Speaking to Gardner via Skype, he outlined Amnesty’s continuing concern. “Nothing in their petition could be called criminal – there is no incitement to violence,” he said, “Nonetheless, they have faced a shocking and orchestrated campaign against them led by President Erdogan.” Moreover, he underlined that prosecution and pre-trial detention are not the only threats they face; signatories of the petition have also been subject to “administrative investigation, unfair dismissal, and violent threats.”

Placing these prosecutions in a wider context, Gardner notes that “pre-trial detention orders [in these cases] would have been unthinkable even two years ago.” That they have been imposed now is “a testament to how much standards of free expression and the judiciary in Turkey have regressed.” Gardner concluded by saying that “the prosecution of [petition signatories], let alone detention can’t be justified in law. The fact that it comes days after President Erdogan called for broadening of the definition on terrorism suggests the court was following political directives not law.

Amnesty’s position on the case is simple: “the statements made by the four academics at the 10 March press conference, and the 11 January petition of the 1,128 original signatories in no way represent incitement to violence and are protected under the right to freedom of expression.”

We call on Turkish authorities to immediately release the four detained academics (Muzaffer Kaya, Esra Mungan, Kıvanç Ersoy and Meral Camcı) and drop the charges against them. We further urge them not to hold any of the detained academics in solitary confinement whilst they are in detention. The free expression of ideas cannot be confused with terror. It is urgent that Turkish authorities drop the investigations into the academics who originally signed the petition. 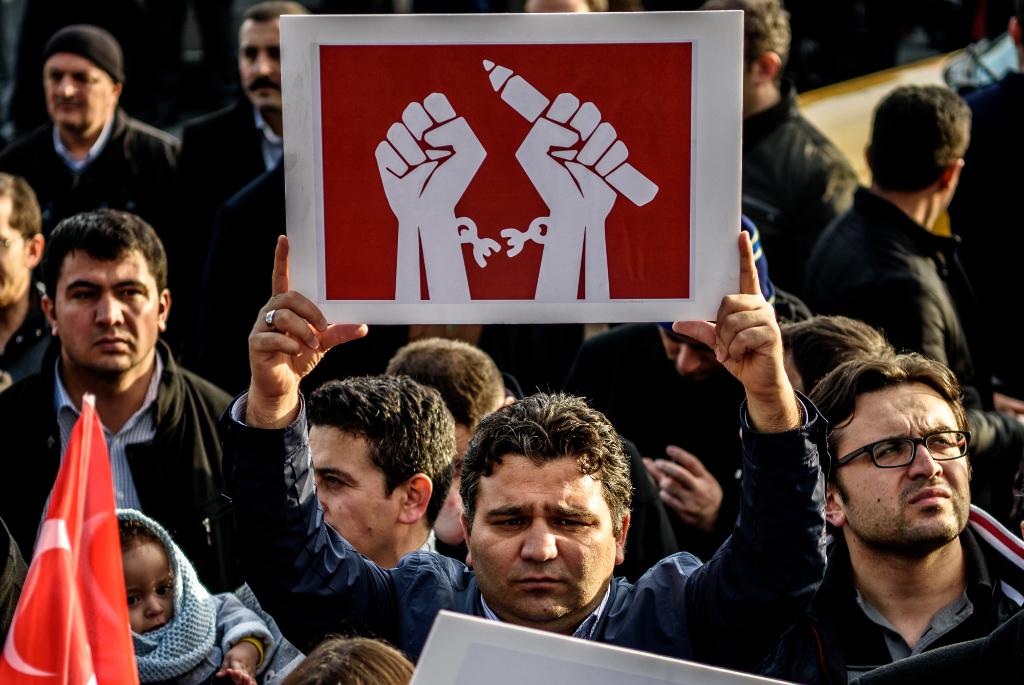 It is vital that the world makes clear to Turkey that the continued attacks on freedom of expression will not stand. There are things that you can do, right now, today, to make your voice heard.

1. Sign the petition. Amnesty has created a petition that we will deliver to Turkish authorities calling on them to release the detained academics and drop the charges against them.

2. Promote the campaign: Use social media to share the petition with your friends and family.  Urge them to lend their voice and share. Are you on a university campus?  Set up a table on campus and help people sign online. Are you a member of a professional organization? Let your colleagues know! A wide range of professional organizations have already voiced their dismay at the crackdown in Turkey. This petition will make sure that Turkish authorities get the message.

3. Tweet for Freedom: Beyond promoting the petition, you can use twitter to voice your opposition to these attacks on freedom of expression in Turkey. Some suggested tweets include:

It is time that Turkey end its campaign dissent and freedom of expression. It is time to make your voice heard.

5 thoughts on “Scholars Jailed in Turkey’s On-Going War Against Freedom of Expression: How You Can Take Action”