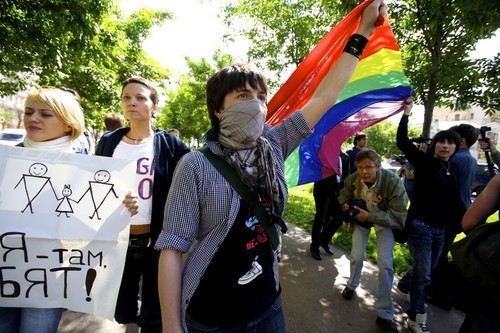 Today, lesbian, gay, bisexual, transgender and intersex (LGBTI) individuals and activists around the world will recognize the International Day against Homophobia and Transphobia (IDAHO). Exactly twenty-three years after the World Health Organization’s landmark decision to declassify ‘homosexuality’ as a mental disorder, LGBTI people and allies continue their work to ensure that the full spectrum of their human rights is respected and upheld.

Just last week, news out of the Russian Federation served as a tragic reminder of just how critical that work is.

On the evening May 9, a 23-year-old man in the city of Volgograd was drinking with two “friends” when he revealed that he was gay. In response, the two men savagely beat the 23-year-old, crushing his ribs, sodomizing him with beer bottles and attempting to burn him alive. They abandoned his body, only to return and smash his head in repeatedly – just in case he might have survived the first attack.

The two men are now in detention and investigators are attributing the motive to the young man’s sexual orientation. This is a rare move according to many Russian LGBTI activists, as police often fail to investigate hate-motivated crimes as homophobic, fomenting an atmosphere of impunity for hate-based violence.

While the investigators’ recognition of the motive in this crime is significant, however, so is increasingly repressive legislation around LGBTI rights in the Russian Federation. The latter is a move in the wrong direction; one of many fueled by the Putin-led government’s increasing intolerance for free expression. The impact of this determined crackdown has negative ramifications for all of Russian civil society, with particularly chilling effects for the LGBT community.

In January 2013, the Russian State Duma showed overwhelming support for a homophobic bill that would outlaw “propaganda of homosexuality amongst minors.” The draft legislation, which is due for a second reading at the end of May, does not define such propaganda, nor is it defined elsewhere in Russian law. If passed, this broad definition could easily be used to try to muzzle the LGBTI community, further stigmatizing and isolating LGBTI Russians and curtailing their access to important information about sexual and mental health.

Such a ban is already in force in St. Petersburg, Russia’s second largest city and has been used to fine and arrest numerous nonviolent LGBTI demonstrators.

More recently, President Putin publicly confirmed reports that his government was considering a change to Russian law that would block gay couples from adopting Russian orphans. This announcement came fast on the heels of France’s decision to give same-sex couples the legal right to marry and adopt children.

When police discovered the dead body of the 23-year-old man from Volgograd in the early hours of May 10, therefore, the grisly murder was not seen as an isolated act of hate. Rather, it is the product of increasing homophobia and intolerance that permeate the highest levels of Russian government.

So as you honor IDAHO today, also take a moment to honor the short life of a young man in Russia, who was killed for being honest about who he was. Call on Russian President Vladimir Putin to end the crackdown on all free expression, including LGBTI rights. Take action, and help us shine a light of hope in memory of all who have suffered hate-based violence and for all of those who will continue to work against transphobia and homophobia for the next 23 years.

Headed to Pride this year? Download our Pride Toolkit for Activists or join us for a webinar on women’s and LGBT rights.

6 thoughts on “As the World Celebrates IDAHO, Homophobia in Russia is on the Rise”