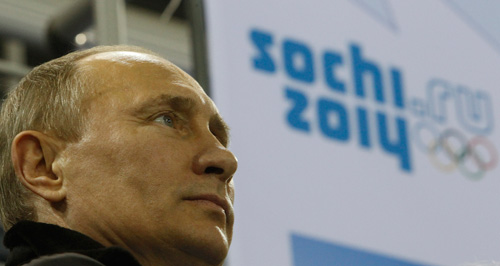 While hosting the Olympics is an incredible honor and an opportunity for the world to come together peacefully in the mutual enjoyment of universal sport, it’s also the perfect opportunity for the Russian government to do some serious soul-searching and correct its human rights record.

Recent legislation has put human rights activists - or anyone who hints at political opposition - at risk of imprisonment, torture or worse.

”
President Putin’s continuing escalation of repression has generated concern among many Russian citizens and criticism the world over. Peaceful dissent and protests have been met with arrest and imprisonment, as in the case of opposition leader Alexey Navalny and Pussy Riot — a band which received worldwide attention after three of its members were arrested for performing a song.

The Russian government must welcome peaceful dissent as a formative tool, instead of stifling it with increasing restrictions.

Pussy Riot’s Maria Alyokhina and Nadezhda “Nadya” Tolokonnikova were sentenced to two years in Russia’s infamous penal colonies, hundreds of miles away from their families and young children, simply for performing a song. Since their conviction, Maria has received death threats in prison and Nadya has been hospitalized due to health concerns. After having criminal charges leveled against him one day before he was set to lead an anti-Kremlin rally, Alexey Navalny learned the Russian government was also targeting his brother.

Amnesty International is calling for the immediate release of the members of Pussy Riot, and for all charges against them to be dropped. Families in Sochi who have been evicted from their homes to make way for Olympic development must be compensated or have their homes restored to them.

And moving forward, Russia must stop persecuting people simply for expressing their beliefs, even if those beliefs don’t align with the ideologies of Parliament and Mr. Putin.

What can you do? Take action for Pussy Riot and free speech — add your own photos and messages of solidarity to our Pussy Riot World Map!

One thought on “One Year Before Olympics in Sochi, Russia Continues its “Assault on Freedom””