Leyla Yunus, one of Azerbaijan’s most prominent human rights defenders and former prisoner of conscience was freed on December 9. The Baku Court of Appeals changed her sentence with a conditional release due to her deteriorated health. The court placed her on probation for the next five years and maintained her guilty verdict, widely denounced as political retaliation for her work.

Welcoming Leyla’s release, Amnesty International emphasizes that it should be followed by immediately and unconditionally setting all prisoners of conscience in Azerbaijan free.

“This is a step in the right direction that will send a crucial message of hope on the eve of International Human Rights Day. It should open the door to unconditional freedom, not just for Leyla Yunus, but all prisoners of conscience in Azerbaijan,” said Denis Krivosheev, Deputy Europe and Central Asia Programme Director at Amnesty International.

“Azerbaijani authorities must now quash all charges against Leyla Yunus and her husband Arif and remove any conditions attached to her release.”

Thousands of amnesty activists around the world have been working on Leyla and Arif’s release since their detention in July 2014. I could not wait to share great news with Ann Marie Lanza and Nancy Lyons of AIUSA Group 15 in Concord, MA.

“What a birthday present for Leyla! (She’s turning 60 on December 21.) We just began to work on Leyla and Arif’s behalf in September. Since then, at tabling events, faith groups in Concord, Sudbury and Framingham, MA have signed petitions that we provided, addressed to the President of Azerbaijan and the Ambassador to the U.S., and we have sent personal notes to Arif and Leyla. We are thrilled and can’t wait to spread the news,” wrote Ann Marie to me.

Leyla and Arif Yunus were convicted on August 13, 2015 for “fraud” and other purported crimes related to their NGO work. They faced prison sentences of eight and seven-and-a-half years, respectively. Arif Yunus was released on medical grounds on 12 November.

Amnesty International recognized the couple as prisoners of conscience who were convicted of trumped-up charges. They also face separate charges for “high treason”, yet to be heard in a different court. 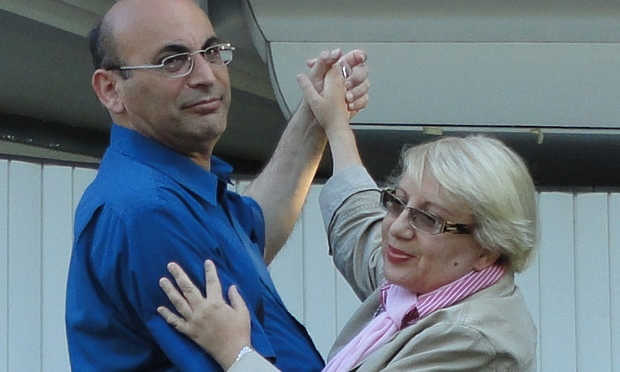 Leyla Yunus suffers from a number of ailments including diabetes and hepatitis C. She has complained that she was severely beaten by prison guards since being detained in July 2014. She appeared frail as she left the courtroom on December 9, walking with difficulty and leaning on her husband, Arif.

“I said in court that I was turned into prison dust,” Leyla Yunus told reporters after her release. Quoting from 19th-century poet Fyodor Tyutchev, she added, “It’s not given us to foretell how our words will echo through the ages, but [forgiveness] is given us as grace is given us.”

The prosecution of Leyla and Arif Yunus has been condemned by the international community as part of a deepening crackdown on dissent in Azerbaijan.

Their release from incarceration follows recent efforts by their daughter, Dinara, to increase Western pressure on Aliyev’s government over their case.

Dinara Yunus met with U.S. officials and prominent rights advocates during a trip to Washington in October. She told an October 28 briefing on Capitol Hill that she feared her parents would “die behind bars” due to their failing health.

U.S. State Department spokesman John Kirby said in a statement that Washington welcomed Leyla Yunus’s release and “will continue to seek opportunities to advance all areas of our relationship, including security, energy, and democracy and human rights.”

“Together with the November release of her husband, Arif, we view it as a positive step, and we look forward to more such steps,” Kirby said.

U.S. Representative Chris Smith (R-NJ), chairman of the Commission on Security and Cooperation in Europe – also known as the Helsinki Commission – called Yunus’s release “long overdue” and a “welcome first step – but only a first step.”

Smith said that “the spurious charges against Leyla and Arif must be dropped, and the Yunuses permitted to resume their peaceful efforts on behalf of human rights in Azerbaijan.”

Amnesty International is calling for the immediate and unconditional release of 18 other prisoners of conscience in the country. Earlier this year Azerbaijan’s authorities ramped up their crackdown on the right to freedom of expression by creating a “criticism-free zone” around the ill-fated inaugural European Games in June 2015.