That is what the social media campaign #NiUnaMenos is all about. The hashtag #NiUnaMenos, meaning not even one less (woman) represents the support Argentinian society has for these victims and their families. As it went viral on Twitter we can see that they are not going to tolerate this type of violence, they will not stay silent.

Two more women were deliberately and violently murdered in early May adding to the rising number of femicide victims in Argentina. Suhene Carvalhaes Muñoz was a 26 year old woman that suffered an intense beating from her fiancé back in July of 2014. Her fiancé reacted violently when Suhene wanted to go home and study for a final exam she had the next morning. The trauma led her to be hospitalized with grave lacerations in September of that year and died from these injuries on May 12, 2015. She was studying to become a veterinarian.

Then, on Sunday May 10, a 16 year old boy murdered his pregnant 14 year old girlfriend, Chiara, and buried her on his backyard. The detectives in charge of the investigation believe that the boy’s mother wanted Chiara to have an abortion and after she refused, the boy’s family decided to beat her to death. The boy confessed to digging the hole where he buried Chiara’s body a few days in advance, showing the deliberate nature of the crime.

The World Health Organization (WHO) explains that

“Violence against women comprises a wide range of acts – from verbal harassment and other forms of emotional abuse, to daily physical or sexual abuse. At the far end of the spectrum is femicide: the murder of a woman.”

Suhene and Chiara are just two femicide victims in Argentina but the numbers keep escalating. According to the WHO, 35% of all murders of women around the world are perpetrated by the victim’s partner or former partner and usually follow a long history of domestic violence. WHO also notes that pregnant women are generally at a higher risk of intimate partner femicide. 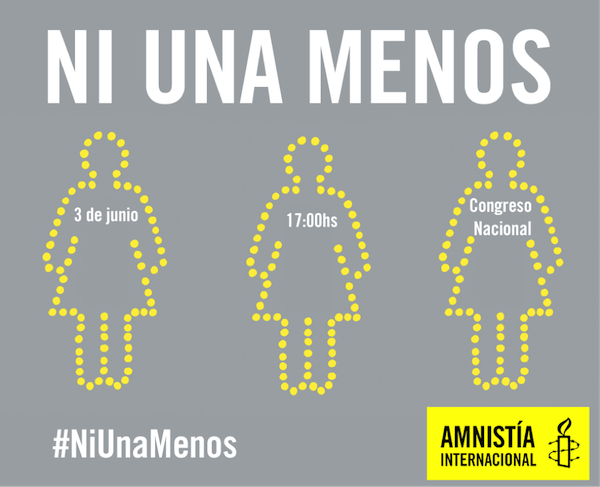 Data on the number of femicides is sparing as records do not often show the victim’s relationship to the perpetrator or the motives behind the crime. According to La Casa del Encuentro, a non-governmental organization working to advance women Human Rights in Argentina, there were 277 femicide victims in 2014 alone and a total of 1808 recorded femicides between 2008 and 2014.

In 2009, Argentina passed the Comprehensive Protection for Women Act 26.485 in order to prevent and combat violence against women in the country; however, its implementation has been flawed and the continued violence demonstrates that it is in need of strengthening.

This week Argentinian society reached a breaking point with the rising crime rates against the nation’s women and begun organizing. Hundreds of people protesting against femicide will come together on June 3rd at the National Congress to speak up against this type of violence against women.

Amnesty International Argentina supports the social media campaign #NiUnaMenos and will march with the protesters against femicide in June. The Twitter campaign keeps gaining supporters in Argentina and around the world. You should support it too.

Share your picture on Twitter using the hashtag #NiUnaMenos and show your support for this cause. Speak up for those who could not, those who were afraid, and those who still are. Be the voice of all the women suffering of violence and shine a light on these issues.

6 thoughts on “Argentina is speaking up for its women, we should join them”