Too often, gender is overlooked in discussions of gun violence. Everyone in society is affected, but women and men experience gun violence very differently. Men are much more likely than women to buy, own and use small arms. They are also much more likely than women to become victims of gun homicide (82.6%) and to commit gun homicide (92.1%). Men are most often attacked by acquaintances or as victims of violent crime by strangers (34%).

Women, however, are much more at risk than men of being assaulted by people they know. Family killings are the only category of homicides where women outnumber men as victims, and when a woman is murdered in her home, her partner or a male relative is most likely to be the perpetrator. The World Health Organization reports that “one of the most important risk factors for women – in terms of their vulnerability to sexual assault – is being married or cohabiting with a partner.” Refusing sex is one of the most frequent reasons cited by women as a cause of violence. 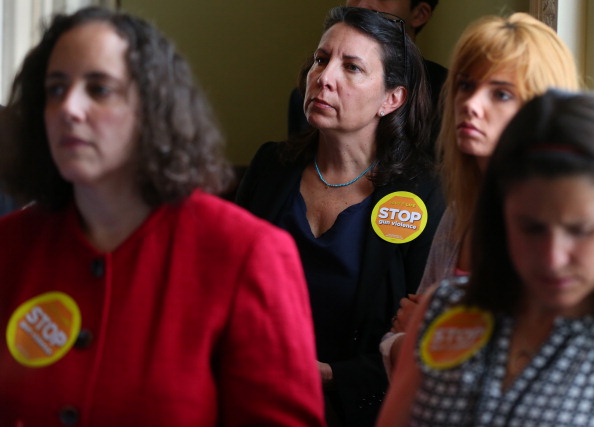 Studies in the U.S. have found that having a gun in the house increases the risk of murder of someone who lives there by 41%, but the risk for women nearly triples – an increase of 272% (Photo Credit: Jonathan Wiggs/The Boston Globe via Getty Images).

Far from keeping women safe in their homes, studies in the U.S. have found that having a gun in the house increases the risk of murder of someone who lives there by 41%, but the risk for women nearly triples (an increase of 272%). Between 2001 and 2012, 6,410 women in the U.S. were killed by an intimate partner with a gun – more than the number of U.S. troops killed in the wars in Iraq and Afghanistan combined.

Episodes of domestic violence are far more likely to become lethal when a gun is involved. With access to a gun, a woman’s chances of being killed by her husband or partner increase five-fold. Women who live in homes where a law enforcement officer, security guard or a member of the military is authorized to take a weapon home are at heightened risk of violence. When men come home from armed conflict traumatized and angry, bringing their weapons with them, they often use them to threaten or harm the women who live with them.

Gun violence sometimes goes hand in hand with gang violence, and a failure to respect women’s rights. The result is a higher level of gender-based violence against women. The presence of guns increases the risk that women and girls will be targeted for violent attacks, including sexual assault. In areas where there is gang violence, women do not feel safe to go about their lives outside their homes.

State legislatures have passed a patchwork of laws intended to keep guns out of the hands of individuals with a high risk of using them in acts of violence. However, these laws, the definitions of the circumstances they cover, and enforcement are inconsistent across the country. Women in the United States are 11 times more likely to be killed with a gun than women in other high-income countries around the world. More than five women in the United States are murdered every day with firearms. This is unacceptable, and the success of other developed countries with protecting their citizens demonstrates that such high levels of gun violence need not be tolerated.

Amnesty International regards gun violence against women as a violation of their human rights. The United Nations Universal Declaration of Human Rights states in Article 3 that “Everyone has the right to life, liberty and security of person.” Women cannot freely exercise these rights when their lives and safety are under threat of gun violence.

Under international law, all countries have an obligation to exercise “due diligence” to protect women from gender-based violence, including armed violence. The enactment of the Violence Against Women Act was an important milestone toward protecting women in the United States from violence in their homes and communities. Now Congress must support additional measures to carry out its due diligence responsibility to prevent gun violence and protect the rights of all people to fully enjoy their human rights.