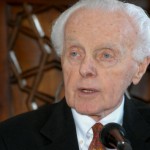 The launch of the Defending Freedoms project coincides with Amnesty’s annual Write#4rights, when AI members around the world will write letters to highlight the plight of individuals who are at risk for simply expressing themselves and seeking to enjoy their human rights.

By working on behalf of behalf of political prisoners, including prisoners of conscience, participating members of Congress will also encourage countries to draft laws and adopt policies protecting freedom of expression, freedom of religion, freedom from torture and ill-treatment, the right to a fair trial and other universal human rights.

The launch took place a day before a report by Amnesty International was released detailing increasing attacks against human rights defenders in Latin America, just one stark reminder of the need for leadership and an increased focus on human rights by the United States and the international community.

The Lantos Commission, US Commission for International Religious Freedom and AIUSA hope to grow this initiative and pair more congressional offices with prisoners of conscience to advocate publicly for their release and push for systemic reforms.

One thought on “Is the U.S. Congress Starting to Get Its Human Rights Mojo Back?”