As a major supplier of arms and military aid to Israel, the U.S. government is not just a convener of “peace talks” and negotiations. It is also a major investor in the status quo, a state of affairs in which millions of Palestinian civilians face the risk of brutal violence from Israeli security forces simply for peacefully exercising their human rights.

It is time for a real peace process that addresses American military complicity in Israel's human rights violations in the occupied West Bank.

”
That’s why the U.S. government must stop providing weapons, ammunition, military equipment and training to Israel until Israeli security forces stop violating Palestinian human rights and are held accountable for past violations.

Ultimately, the U.N. Security Council should impose an international arms embargo on Israel, Hamas, and Palestinian armed groups in Gaza. But that shouldn’t stop the U.S. from suspending military support to Israel now.

The human rights violations and abuses perpetrated by Hamas or armed Palestinian groups do not justify Israel’s violations in the West Bank, including East Jerusalem. For those living under Israeli military occupation in the Palestinian West Bank, there is a two-track system of law for two different populations.

The hundreds of thousands of Israeli Jews who reside in illegal West Bank settlements live under Israeli civil law with the protection of Israeli security forces. Palestinians, however, live under a separate system of Israeli military law that eviscerates their human rights to freedom of expression and association. This military rule is enforced – sometimes lethally – by the very Israeli security forces which protect those illegal Jewish settlers.

Perhaps the best example of this is Israeli Military Order 101, which prohibits all gatherings of 10 or more people “for a political purpose or for a matter that could be interpreted as political” or even “to discuss such a topic.” Any such gathering is illegal without the permission of the Israeli military commander in the area. 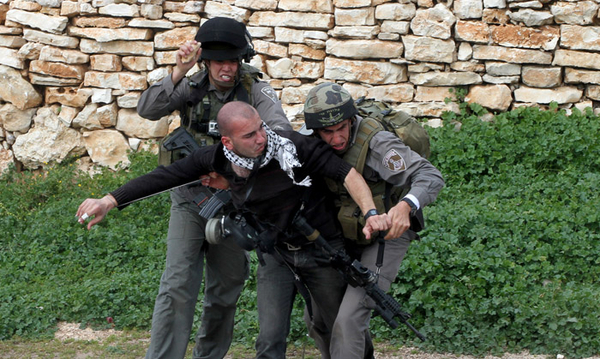 Israeli soldiers and police in the West Bank use everything from live ammunition to tear gas to violently crack down on Palestinians engaged in largely peaceful acts of protest (Photo Credit: Private).

When Palestinians inevitably violate Order 101 or other similar rules, they risk a violent response from Israeli soldiers and police. In our latest report, “Trigger Happy: Israel’s Use of Excessive Force in the West Bank,” Amnesty International details just how Israeli soldiers and police in the West Bank use everything from live ammunition to tear gas to violently crack down on Palestinians engaged in largely peaceful acts of protest.

These include rubber-coated metal bullets and the reckless use of tear gas. Some Palestinians in the West Bank do throw rocks at Israeli security forces enforcing the occupation. However, such acts generally do not pose a serious risk to Israeli security forces, given soldiers’ distance from protesters and the heavily protected nature of their positions. The Israeli army’s penchant for responding to rocks with lethal violence flies in the face of international law.

Against this backdrop of violence by the military, Israel reportedly doubled the construction of Jewish-only settlements in the West Bank between 2012 and 2013. This settlement construction frequently involves the forcible confiscation of Palestinian farmland, villages, and roads, which often involves even more violence against Palestinian protesters.

All of this brings us back to the original sin – leaving the word occupation out of the public conversation. The fact of the matter is that Israel maintains complete control over 60 percent of the West Bank.

Meanwhile, the Palestinian Authority has limited jurisdiction in some 230 separate enclaves that are each surrounded by other areas under full Israeli military administration. Instead of obscuring this reality, President Barack Obama and Secretary of State John Kerry must be transparent in their language.

Not only that, but the role of U.S. military aid in subsidizing Israeli human rights violations must also be acknowledged. The human rights abuses perpetrated by Hamas or Hezbollah are no justification for Israel’s violations in the West Bank. And as the largest outside source of arms to Israel, the Obama Administration must acknowledge this.

It is time for a real “peace process” that addresses American military complicity in Israel’s human rights violations in the occupied West Bank.