By Peter Splinter, Amnesty International’s Representative to the United Nations in Geneva 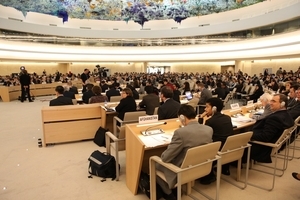 By the end of 2011, all UN member states’ human rights records had been examined under the Universal Periodic Review process. © Eric Bridiers/U.S. Mission

If the Israeli government is not careful, it will ruin an important global human rights process for everybody.

The Universal Periodic Review, a process to examine states’ human rights records, has until now been truly universal: all United Nation member states were reviewed by the end of 2011 and the second cycle of reviews has already started.

But now the government of Israel is not engaging with the process. Every indication is that the Israel will not be present this afternoon when it is scheduled to be examined under the Universal Periodic Review. As the only recalcitrant state among 193, Israel’s deliberate absence would sabotage the principle of universality. Consequently the Universal Periodic Review stands to lose the compelling legitimacy it derives from being applied even-handedly to all states. Why should states that would prefer to escape scrutiny of their human rights record, or are severely resource constrained, submit to this process if Israel’s non-compliance demonstrates that it is no longer universal?

Not so long ago, Israel, and many other states and organizations, had expressed concerns that the Commission on Human Rights was biased and operated on double standards. It was abolished and in 2006 the Human Rights Council was established. With it came a great improvement: the Universal Periodic Review. Finally, a process applied consistently to all states was at hand, and in its first cycle of reviews, it worked. It is ironic that Israel is now undermining a mechanism that was designed to remedy the bias Israel protested against.

The Israeli government complained that the Human Rights Council singled Israel out for criticism by establishing a Fact-Finding Mission on Israeli Settlements in March 2012, and consequently withdrew its cooperation with the Council. Israel had already refused to cooperate with several important mechanisms such as the Fact-Finding Mission on the Gaza Conflict in 2009. Yet those steps are unrelated to the Universal Periodic Review.

Amnesty International voices the worldwide consensus in urging Israel to participate in its Universal Periodic Review during 2013, in accordance with the rules of the Human Rights Council. Anything less than Israeli engagement at a senior level will weaken the effectiveness of the mechanism. Even Israel’s best friends will be hard put to defend such actions. According to the Human Rights Council protocol, appropriate measures will be taken in relation to states that persistently refuse to co-operate with the Universal Periodic Review.

If Israel fails to fully engage in its examination under the Universal Periodic Review during 2013 as required, will the victims of human rights violations, from Afghanistan to Zimbabwe, thank the Israeli government?