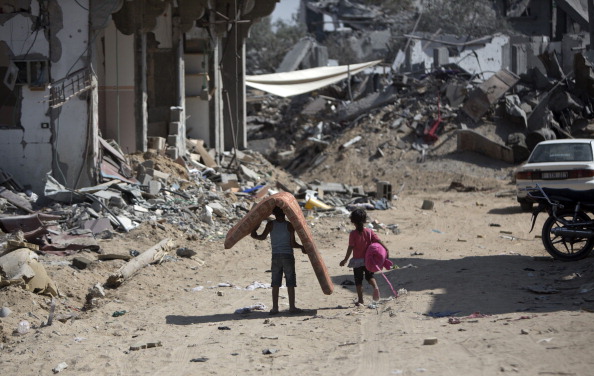 In this part of the world, humor is one of our ways of dealing with situations that are so terribly sad. From the start of this conflict, more than 1,800 Palestinians and 64 Israeli soldiers as well as three civilians in Israel have been killed. Each and every one of these lives lost – children, babies, elderly people, women, men, in Gaza and Israel alike – is tragic.

When you have such complexity in a family situation, humor is often the best approach, and so we joke sometimes that if the rest of the world heeds Amnesty International’s call for an arms embargo, I'll be coming for his gun first.

”
Public discourse in Israel seeks relativity: If you must express sadness over people dying in Gaza, at least don’t be as sad as when it’s an Israeli that is killed. And make sure to note it’s Hamas’s fault, too. Plain simple sadness means that there must be something wrong with you: you must care about them more than about your own people. Traitor.

As I refuse to take part in this, and instead see every life as sacred, without relativity, without context and without justification, I find human rights discourse to be a good refuge. While human rights are a legal framework, they are built on the basis of a higher moral code of the nations of the world at their best. We in Israel ought to have a special affinity towards human rights, as they were created in the aftermath of World War II, as the world’s way of saying ‘never again.’

Nations came together then and decided that there must be limits to the absolute power a nation has over its own citizens, as well as those in countries with whom it is at war. It is a code that has existed in Judaism for centuries: Arvut Hadadit, mutual responsibility between all people, or as Amnesty International often refers to it: Solidarity. The idea is that countries will involve themselves in each other’s business to assure that a set of collectively adopted rights will be granted to each and every person in the world.

Israel has been consistent in its support for the creation of human rights instruments. This includes the active role Israel took in establishing the Refugee Convention in the 1950s, or some good first steps on the Arms Trade Treaty, which was adopted just last year.

Yet, as we have witnessed countless times, Israel has one standard for the rest of the world, and another for itself. Actions which amount to clear violations of human rights when another country commits them, are coined ‘political’ when they happen here, and if you criticize those actions you’ll be accused of ‘ignoring the context,’ or Israel’s favorite: ‘criticizing us is anti-Semitic.’

It’s 2:30 a.m., and I have just pulled my five year old son out of bed. I am holding him in the stairwell – our designated ‘safe zone’ – as the missile siren wails. In a minute, we’ll hear a few loud bangs, which we hope will be the Iron Dome intercepting rockets; rockets that were sent to kill us.

My son spends his mornings in kindergarten, hearing about the soldiers protecting us. He boasts about his own uncle the brave soldier. The children draw pictures which are sent to the combating army units and hung up on tanks and artillery. In the evening, during another siren, he asks me whether there are sirens in Gaza too. I explain that kids in Gaza have none, nor do they have an Iron Dome. “What protects kids there?” he asks.

It seems that the last line of protection for kids in Gaza, for my kid, and for all civilians on both sides of this conflict, is the upholding of human rights. I truly hope that more people around the world take action, to call on all fighting parties to stop targeting civilians, and on their own countries to utilize the International Criminal Court and to impose arms embargoes, to keep us all safe.

11 thoughts on “My Brother Went to War in Gaza, I Stayed Back as Amnesty International Israel Director”