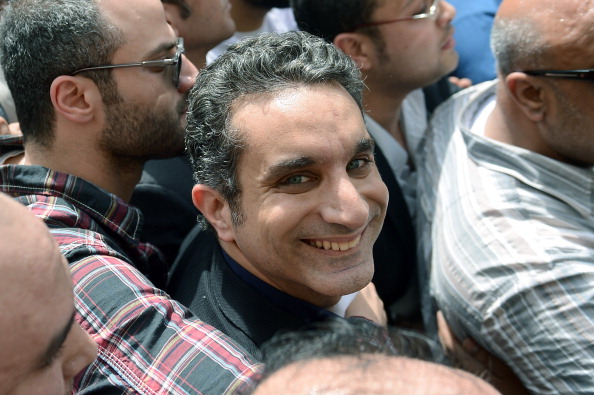 Egyptian satirist and television host Bassem Youssef surrounded by his supporters upon his arrival at the public prosecutor’s office in Cairo. Egypt’s public prosecutor ordered the arrest of Youssef over alleged insults to Islam and to President Mohamed Morsi, in the latest clampdown on critical media (Photo Credit: Khaled Desouki/AFP/Getty Images).

“I am an American satirist, and Bassem Youssef is my hero,” Jon Stewart has said of his so-named Egyptian counterpart.

Bassem Youssef, whose show frequently pokes fun at Egyptian authorities and the use of religion for political purposes, found himself in the global spotlight after criminal charges were filed against him for his political satire. Jon Stewart highlighted the case on The Daily Show, TIME Magazine named Youssef one of the 100 Most Influential People of the year, and the Egyptian assault on free speech received international attention.

But Youssef himself cast attention on the many others caught up in the crackdown.

“Touched by people’s support and media attention, however, there are many more activists being prosecuted that deserve to get that support,” Youssef tweeted after his arrest.

Ahmed Anwar is one of those activists. This week, he faces trial for a video blog that went straight for the gut on the issue of police brutality.

In March 2012, Ansar posted a video that showed police officers belly dancing, calling them “the ministry of belly dancers.” But behind the humorous footage, Anwar had a somber message: the Egyptian Ministry of Interior had to stop fooling around and get serious about ending police brutality and impunity for human rights abuses.

It was only a video, but it got Anwar in trouble.  He was arrested on March 17, 2013 and charged for “insulting” the Ministry of Interior and misusing the Internet.

“It’s ironic that May 3 is World Press Freedom Day and I’m facing trial the next day just for posting a video,” Anwar told Amnesty International. To take action, click here.

In Egypt, making fun of the authorities is no laughing matter. It’s a criminal offense. Over a four-week period in March and April, nearly three dozen people were charged or arrested simply for expressing their views. Charges ranged from “insulting the president” or “defamation of religion.” Amnesty International believes these charges are either politically motivated or trumped-up.

Others under investigation include Hamdi Al-Fakharany, who was known for exposing corruption in the former Mubarak regime and has been a similar thorn in the side of the new Morsi government; blogger Alaa Abdel Fattah and his sister Mona Seif Al Islam, who launched the “Not to Military Trials” initiative; and Alexandria opposition activist Mahinour Masri, who was one of 13 people arrested on March 29 during a sit-in by lawyers at a police station.

The assault on political humor and speech must end, starting with Ahmed Anwar’s trial this week. All charges against Anwar and any Egyptian accused of insulting public officials or religion must be dropped. Egyptian authorities must also stop investigating defamation cases as a criminal offense.

The person behind the charges is public prosecutor Talaat Abdullah. While Ahmed Anwar spends World Press Freedom Day preparing for his trial, Amnesty International members around the world will take to Twitter to let the prosecutor know that there is no crime in making people laugh.

Join us and send the following message: [email protected]_Abdullah #Egyptauthorities should stop gagging comedians and start getting serious about #humanrights reform.

You can also take action to stop the crackdown on freedom of expression in Egypt here.