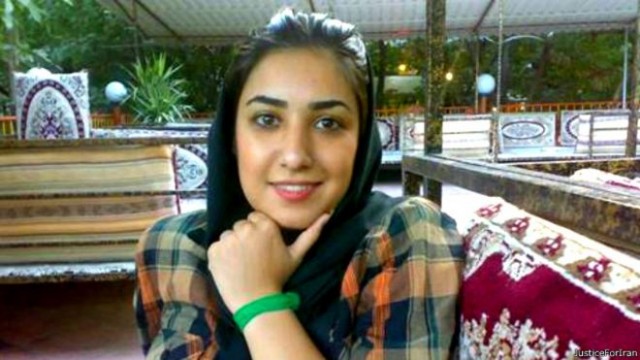 Although such preoccupations may seem risible to some, the people who are caught up in this dragnet are suffering very real and harsh consequences.

Atena Farghadani is a 28-year-old artist and women’s rights activist. She drew a cartoon depicting some members of Iran’s Majles (Parliament) with animal heads, as a form of protest against bills that are in different stages of moving through the parliamentary process that, in an effort to boost child-bearing, would among other things, restrict access to contraception and establish preferences in hiring for married women over single women.

We just learned that she has been sentenced to an astonishing twelve years and nine months in prison on spurious charges of “spreading propaganda against the system,” “insulting members of the parliament through paintings” and “insulting the Supreme Leader” because of her cartoon. She is also being charged with “gathering and colluding with deviant groups” because she has met with the families of those killed by government agents in the unrest following the 2009 presidential elections and because of an art exhibition she held which was attended by members of Iran’s persecuted Baha’i community.

She has spent eight of the last ten months in prison since her original arrest last August; her trial in one of Iran’s notoriously unfair Revolutionary Courts started on May 19. She went on a hunger strike in February 2015 to protest her detention in poor conditions and suffered a heart attack. While she was in prison last fall she was so anxious to express herself, even behind bars and deprived of art supplies, that she attempted to use small paper cups to create art. For this she was subjected to abusive treatment by prison guards.

Prominent human rights defender Narges Mohammadi is also in prison and on trial for her peaceful activism—in her case her opposition to the death penalty, her association with Iran’s Nobel Peace Prize laureate Shirin Ebadi, and her meeting last year with Lady Catherine Ashton, then the European Union’s Representative for Foreign Affairs and Security Policy. Narges Mohammadi has faced previous persecution because of her involvement with the peaceful Center for Human Rights Defenders. She was detained for three months in 2012 and eventually given a medical release because of serious health problems including seizures and temporary loss of vision, exacerbated because of the stressful and sub-standard conditions prevailing in Iran’s prisons. She was re-arrested on May 5, 2015, two days after her new trial began.

Narges Mohammadi also faces unsubstantiated charges including “spreading propaganda against the system,” “assembly and collusion against national security” and “membership of an illegal organization whose aim is to harm national security” for her founding of Step by Step to Stop Death Penalty (note: Iran is the Number Two executioner in the world, after China).

And in a widely publicized case which seems to demonstrate how relentless the Iranian hard-liners have become despite widespread international condemnation, Washington Post correspondent Jason Rezaian has been in prison for ten months, mostly in solitary confinement, and is currently on trial in the Revolutionary Court presided by the “hanging judge” Salavati, known for the harsh sentences he hands down to prisoners of conscience. Jason Rezaian had been a credentialed journalist peacefully carrying out his professional activities when he was suddenly arrested in July 2014 along with his wife and two others. He has been charged with espionage as well as “spreading propaganda against the system.”  Among the “evidence” presented by the prosecutors for the serious charge of espionage is an application Mr. Rezaian submitted in 2008 to work in the then-newly elected President Obama’s administration (he was turned down) and an application for U.S. visa he filed for his Iranian wife.

The implacable onslaught on any and every exercise of the right to express oneself and to freely exchange information by those who wield power in Iran must be met by a commensurate response from human rights activists around the world. We all need to remind the Iranian authorities that the world is watching them and deplores the repression of freedom of expression. Please take this action on Narges Mohammadi and also write to the Iranian authorities about Atena Farghadani and Jason Rezaian.

2 thoughts on “From Animal Cartoons to Opposition to the Death Penalty: Just About Anything Can Land You in Prison in Iran”