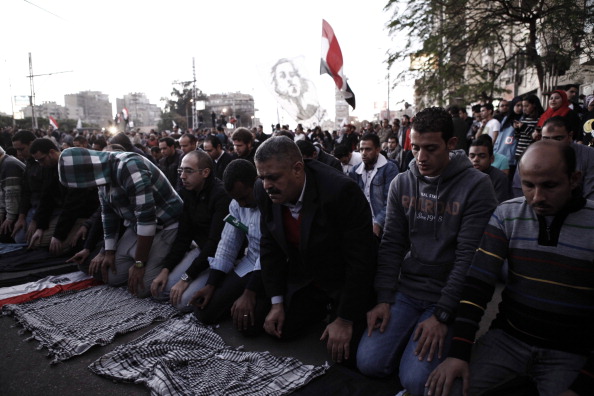 For the U.S. government, the crisis presents a difficult situation, but officials really have only one choice.  They must insist on the primary importance of a constitution that will protect human rights. The U.S. has also had other priorities with regards to Egypt — maintaining stability in the Middle East’s most populous nation, supporting its role in the Israeli-Palestinian peace process and deterring armed Islamist groups.

All of that won’t matter if the crisis in the streets isn’t averted.  This time the main concern for the U.S. has to be with fulfilling the Egyptian people’s demands for justice and dignity that fueled the 2011 uprising.  With hard evidence that some of the tear gas used in 2011 against the protesters was made in the U.S., our government owes the Egyptian people nothing less.

The drafting of the constitution was flawed from the start.  There was minimal progress during the military rule after Mubarak’s resignation, which lasted more than a year. That was followed by a flurry of activity from a Muslim Brotherhood-led drafting panel that rushed the document through a Constituent Assembly in one day without significant public discussion. A ratification vote is proposed for one week from now.

This flawed process is matched only by the constitution’s flawed content.  Not only does the proposed constitution limit freedom of religion and expression, it also harkens back to the worst abuses of the Mubarak era by allowing for military trials of civilians.

It also fails to produce any protections for women’s rights or ending discrimination against gender.  The message sent to the many women who were at the forefront of the 2011 uprising is that all their leadership was for naught.  Based on the reports of the women in the streets this week, the activists aren’t listening.

Activists also fear that the constitution holds weak protections for civil society, such as trade unions, the press and an independent judiciary.  These, of course, represent the social elements that suffered the most under the 30 years of Mubarak rule, the area that Egypt must develop to return to its heritage of a stable, vibrant and intellectual life.

In addition, the document fails to fully guarantee economic, social and cultural rights, such as protection against forced evictions; and it also tolerates child labor.  None of this meets any of the demands for dignity that were at the heart of the Egyptian protests, both those in 2011 and in the streets now.

There are also political disputes at hand, and to be clear, Amnesty International is not taking a political side.  Some of President Morsi’s opponents include former members of the Mubarak regime, and it’s not clear what control Morsi’s office has over the actions of the Egyptian military.  It’s also true that the president has taken some steps that would include greater accountability and ending impunity for past human rights abuses, an essential step in the road to peace and justice in Egypt.

Egyptians already have plenty of experience of what an autocratic leader can do with a bad constitution.  In reporting on the crisis, we’re hearing about old controversies about divisions of class and religion, the Christian fear of Muslim Brother rule, and whether former Mubarak allies will use the crisis as a way to regain influence. These are legitimate concerns, but they can be resolved.  The key is a constitution and a political culture that preserves human rights, and it’s time for the U.S. government and the world to help the Egyptians achieve that.

2 thoughts on “Egypt in Crisis, U.S. Must Act for Human Rights”