Maldives is the only country I know where the leader is a former Amnesty International Prisoner of Conscience.  I was planning on using that fact to write how Maldives was a model of how a country could transition from one that was strewn with human rights abuses to one that upholds human rights and the rule of law.  Well…the situation in the country is not as rosy as I was hoping.  In fact, its political leaders will need to use a lot of deftness to avoid bloodshed. 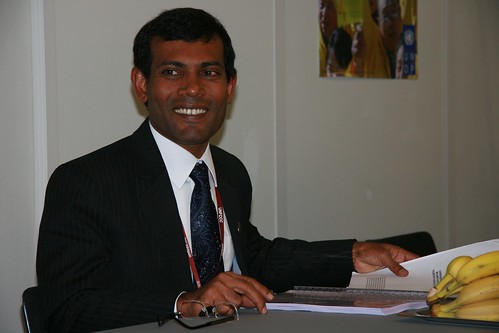 In October, 2008, Mohamed Nasheed (that AI Prisoner of Conscience) won a tough race for the presidency of the Maldives.  Nasheed was a longtime opposition leader who still has a limp from his days of being tortured, defeated Abdul Gayoom, who had the distinction of being the longest serving ruler of any country in Asia.  With the victory came the promise of human rights for all Maldivians.  Sadly, this has been a bit of a challenge for the country as there have been times when people have been at risk for flogging for alleged cases of premarital sex.  There is also the case of Ismail Didi, a Maldivian nonbeliever and air traffic controller who made the fatal mistake of telling people that he was an atheist in a country where it is mandatory to be a Sunni Muslim.  He was later found hanging at his workplace at the international airport.

More recently and more connected with the political crisis is the arrest (and later release) of Abdullah Yameen, one of at least four opposition leaders who were detained and released in recent weeks following the resignation of the President Nasheed’s cabinet on June 29.  It is indeed this political crisis that has the makings of a disaster unless the opposition (led by the Dhivehi Rayyithunge Party, which together with other oppositions parties hold a majority of seats in the legislature) and the government (the Maldivian Democratic Party) can somehow work out a power sharing arrangement.  It’s not looking too good at the moment as President Nasheed was forced to issue a decree to allow the Supreme Court to operate in the absence of an agreement in the legislature.  This has led to an absurd situation where the doors to the Maldives Supreme Court have been locked and guarded by the police to prevent anyone from entering the building.  The Maldivian paper Haveeru has more (emphasis mine):

MPs of the ruling Maldivian Democratic Party (MDP) and Dhivehi Rayyithunge Party (DRP)-led opposition were at loggerheads Saturday over the order of agenda items set for a crucial sitting eventually called off in the evening after three postponements.

The opposition controlled parliament’s failure to reach consensus led to a MDP demonstration outside parliament house. The protestors clashed with police but disbanded on riot police request one and half hours later. There were no casualties.

The widening divide between the two sides developed into a serious crisis and street violence in the past few weeks, threatening to derail the country’s two-year old democracy.  All I can do is hope that President Nasheed, the Maldivian Democratic Party and the Dhivehi Rayyithunge Party do whatever it can to resolve these issues that divide them and pass needed legislation that will bring Maldives’ justice system into line with international human rights standards.