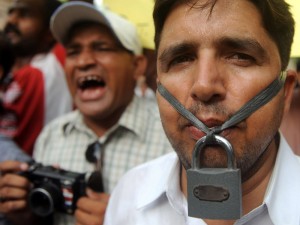 True, but why no mention of the ISI?

Journalists face threats from political parties, criminal gangs, security forces, the Taliban and al-Qaeda. By not ensuring that that the ISI is thoroughly investigated for the murder of Saleem Shahzad, Pakistani authorities are once again encouraging a climate of impunity against journalists in the country.

5 thoughts on “Journalists Killed for Doing Their Jobs in Pakistan”