UPDATE: For more stuff about human rights in South Asia (Bangladesh and India, in particular), follow acharya_dude on Twitter!

In the days around Bangladesh’s Liberation Day (Bijoy Dibosh) celebrations, the country has been convulsed by a number of protests and human rights violations that will have grave implications for the future direction of the country if the government does not immediately take steps change course.

The government, led by Prime Minister Sheikh Hasina, has taken a number of important steps in ensuring the protection of human rights.  But, the recent crackdown against opposition protests and the pettiness of a squabble over housing for politicians threaten to derail gains made.  Worst of all, is the deaths arising from both recent fires in garment factories and from violent street clashes between police and garment workers in Dhaka. 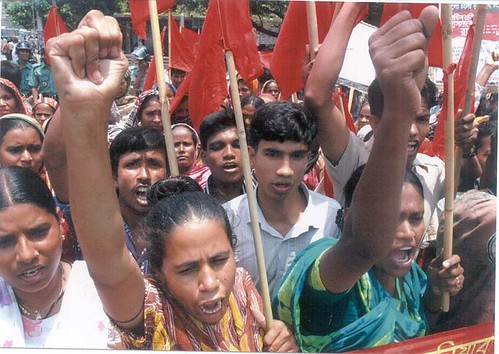 A garment factory protest in Bangladesh

For example, Amnesty International is calling on the authorities in Bangladesh to order an immediate inquiry into the  violent clashes between police and garment factory workers in Bangladesh on December 12.   They must also investigate the devastating garment factory fire which left at least 25 people dead.

The workers had been demonstrating for the implementation of their wage increase, which the government had promised would come into force from the beginning of November. In clashes between the demonstrators and the police in the cities of Chittagong, Dhaka and Narayanganj, on December 12, four people died and more than 200 people were injured.

The recent unrest is the latest in waves of garment factory unrest in the country in the last six months. Dozens of people were injured in June and August as police clashed with hundreds of striking textile workers calling for higher wages. At that time, the government agreed to introduce a pay increase, which would come into force from the beginning of November. Garment factory workers have told journalists that their wages have not increased accordingly.

Prime Minister Sheikh Hasina is quoted in the media as saying that action will be taken against those who created the unrest, but there has been no reference to the need to investigate the use of force by the police.

Most of those injured have been garment factory workers taking part in the unrest. Police have confirmed that their officers have fired tear gas and live ammunition during the clashes. Newspapers have reported that at least two of the four people who died have had marks of gunshots on their bodies. The identity of the other two has not been established.

Journalists say 10 garment factory workers, some of whom may have gunshot wounds, have been admitted to the intensive care units of hospitals in Chittagong and Dhaka.  Many protesters have also been arrested.

Among the detainees is Moshrefa Mishu, president of the Garment Sramik Oikkya Parishad (Garment Workers Unity Council), which promotes the interest of garment workers. Police arrested her on December 14 in connection with a complaint filed against her last June during an earlier wave of garment factories unrest. She was accused at that time that she had “ransacked” the office of a garment making business.

Given a pattern of use of torture in Bangladesh during interrogation, the government should ensure that the detainees are not tortured, and can have family visits.

The use of firearms by the police during the protests and the death of four people require a thorough and rigorous investigation in keeping with international human rights law, including the UN Basic Principles on the Use of Force and Firearms by Law Enforcement Officials.

2 thoughts on “In Solidarity with Garment Workers in Bangladesh”