It’s been over a month since Michael Brown’s death reignited a desperately needed national conversation about the importance of defending human rights at home just as strongly as we do abroad. I joined the Amnesty International USA delegation in Ferguson, Missouri in the immediate aftermath of Brown’s death and what we saw – police armed to the teeth against a community demanding justice – struck me to my core. That night on W. Florissant Ave with my Amnesty colleagues, I watched police blasting tear gas into a crowd that included the elderly and young children.

When I took the helm of Amnesty International USA exactly one year ago, I came with the goal of bringing human rights home. The events of the past year have begun, powerfully, to bring that vision to life. 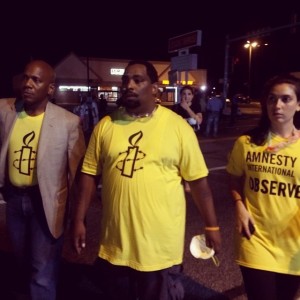 The conversation about human rights today is broader, the connections between domestic and international struggles more visible and more important. When we talk about Amnesty International USA’s work in 2014, we are talking about promoting women’s rights in Tunisia and Algeria and ending torture in Nigeria and Mexico. But we are also talking about access to water in Detroit, environmental and climate justice – like the breathtaking People’s Climate March last weekend in New York, London and around the world – and the common problem of violence against people of color in Missouri and Sao Paolo. It means advocating for the release of peaceful activists and journalists arrested is Sochi, Russia during the Olympics, and it means capturing the world’s attention to the abduction of over 200 Nigerian schoolchildren through the #BringBackOurGirls campaign.

“Bringing human rights home” means that we’re reaching out to young audiences — they are the future of the human rights movement — and making these connections.  We saw this happen in February during our concert in Brooklyn at Barclay’s Center. The landmark Bringing Human Rights Home concert featured performances by Imagine Dragons, Ms. Lauryn Hill, Blondie, Tegan & Sara and the Flaming Lips alongside appearances from Yoko Ono, Susan Sarandon, and Madonna introducing recently-released members of the Russian feminist protest collective Pussy Riot. The line-up also included labor union leaders, released prisoners of conscience, former death row inmates and other powerful voices representing the struggles for rights that impact and can be impacted by the people in the U.S. every day.

By connecting our core issues with emerging struggles, new faces and commanding media attention, this February 5 concert brought Amnesty International USA into the lives of thousands of young people and new recruits, raised up for them the plight of prisoners of conscience around the world, and made real how they as activists can fight for change starting in their own backyard.

My vision for our work also means that we’re reaching broad new numbers of activists. In April, we held our biggest human rights conference in recent history. Members, supporters and allies of Amnesty International USA from across the country gathered in Chicago for the 2014 Annual General Meeting. We marched then with Darrell Cannon and Anthony Holmes, two of nearly one hundred people of color who were tortured systematically by Chicago police. We were honored to host a discussion via satellite with journalist Glenn Greenwald and NSA whistleblower Edward Snowden in one of Snowden’s first public appearances since seeking asylum in Russia. It was there in the Windy City that we also announced our next major campaign to confront gun violence in the U.S. as a human rights issue.

This brings me back to Ferguson. Our delegation went to shine a light. We wanted the Ferguson police to know we – and the world – were watching. Ferguson ignited a much needed broad discussion about race, policing and accountability in this country. While the cameras have largely left Ferguson, the conversation is far from over.  We must stay engaged if we want to see real change.  But we’ve already witnessed the beginnings of what is possible when communities stand together for human rights: the Justice Department has opened a pattern and practice civil rights investigation of the Ferguson Police Department, and has launched a review of police tactics nationwide.  We will continue to demand rights-respecting and accountable policing, not just in Ferguson but throughout the U.S..

In the next year, Amnesty International USA will also prioritize speaking out against gun violence, sharing our own stories and lifting up those of survivors and communities who are most impacted by this crisis.  We live in a reality where schoolchildren perform drills anticipating an armed ambush, in the same way as my generation performed atomic bomb drills. I want to live in a reality where both of those practices are laughably unnecessary. Sadly, we are not yet there. But the strong direction that Amnesty International USA has taken over the past year gives me hope that we can make change even on these most entrenched struggles. We can shine a light on gun violence, just as we shine a light for prisoners of conscience, for those who have been arrested for telling the truth, for prisoners hoping against hope on death row, and for the LGBT community, because we know that every society and every country is stronger when we are ALL equal.

2 thoughts on “Looking Back on an Extraordinary Year”