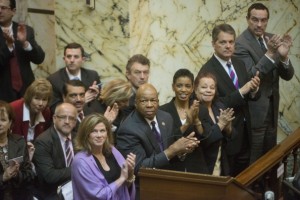 Amnesty International is where I learned how much an impact citizens can have at the state level. I learned that state legislators want to hear from their constituents, will make time to sit down with them and will almost always stop to chat when they are out and about in the real world. State-level organizing is as much about the relationships you build as it is about how good your plan is.

Fast-forward a decade from when I left the Mid-Atlantic in 2003: I had 6 legislative victories (both as a supporter and a leader) under my belt ranging from custodial sexual misconduct – the mistreatment of women in prison – to death penalty repeal. Now as a Campaign Strategist for Equal Justice USA, I find myself back in Maryland, and we are on the cusp of repealing its death penalty.

For the last 3 years, I have been working side by side with Jane Henderson of MDCASE and with our coalition of more than 25 state and national organizations to develop and implement our strategic plan. But the lessons from a decade ago haven’t been forgotten. Every day we try to think about those relationships: the 1-1 contact with our elected officials on top of the constituent pressure we drive through email and phone call actions.

Consider Delegate Kumar P. Barve, who was not a supporter of repeal 2 years ago. That is, until Andrea Hall, one of Amnesty International’s Maryland State Death Penalty Abolition Coordinators started reaching out to him. Andrea called his office, met with him, provided information, and even called up the Kojo Nnamdi show to talk to him. Andrea got his vote and she did it with persistence, good information, and respect.

This coalition continues to remind me that even the smallest contribution at the right moment can have a huge impact. And that creating human rights change requires building human relationships.