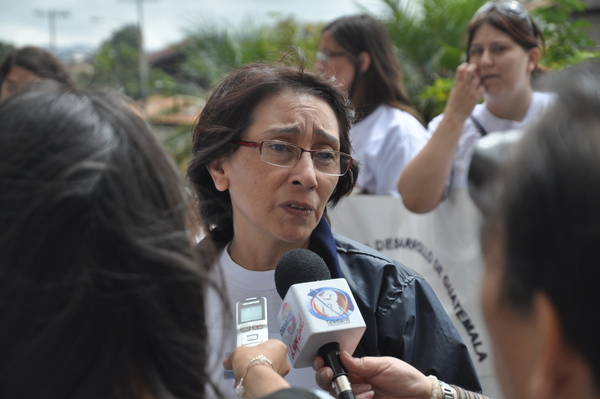 END_OF_DOCUMENT_TOKEN_TO_BE_REPLACED

Iran human rights success stories have sadly been quite rare lately but in just the past three weeks, human rights activists have had several reasons to celebrate.

All of these four individuals had been prominent cases on which activists from Amnesty International and our partner organizations had been tirelessly campaigning. They had all been featured in our most recent Nowruz (Iranian New Year) action from this spring.

END_OF_DOCUMENT_TOKEN_TO_BE_REPLACED

On Thursday June 2, Mansour Ossanlu’s wife stated that he had been granted a four-day medical leave for medical treatment. Amnesty International is unaware of the exact conditions of his release, but some reports suggest that he has been released on bail.

Mansour Ossanlu’s release is only temporary and while it’s welcome that the Iranian authorities have finally recognized his urgent need for rest and medical treatment – itself largely due to the appalling prison conditions in which he has been held – the basic injustice of his detention remains.

Mansour is the leader of the Union of Workers of the Tehran and Suburbs Bus Company. He is currently serving a five-year prison sentence for “acts against national security”. The charges stem from his peaceful work to obtain better conditions for workers in Iran and to end discriminatory laws and practices that curtail workers’ rights.

Mansour Ossanlu – and all others still held in Iran for their peaceful trade union activities – should be released permanently and unconditionally.

Authorities have arrested two leading members of a trade union in Iran that is not recognized by Iranian authorities. Saeed Torabian and Reza Shahabi are currently detained at unknown locations, where they are at risk of torture and other ill-treatment. It is speculated that these two men’s arrests are connected to the June 12th anniversary of the disputed 2009 presidential election. Both men were arrested, while authorities searched their homes and confiscated their computers and cell phones.

Saeed Torabian and Reza Shahabi are both members of the The Union (or Syndicate) of Workers of the Tehran and Suburbs Bus Company (Sherkat-e Vahed), which was banned after the 1979 Islamic Revolution. The union activities resumed in 2004, although the union itself is not legally recognized.

Despite the fact that the union is not recognized by Iranian authorities, the arrests of Saeed Torabian and Reza Shahabi are unlawful. Iran is a State Party to the International Covenant on Civil and Political, Article 22 (1) of which states: “Everyone shall have the right to freedom of association with others, including the right to form and join trade unions for the protection of his interests,” and to the International Covenant on Economic, Social and Cultural Rights, Article 8 of which guarantees the “right of everyone to form trade unions and join the trade union of his choice”.

An enforced disappearance facilitates the use of torture and other ill-treatment, and Amnesty International is concerned about the conditions of these two men. Saeed Torabian and Reza Shahabi are believed to be prisoners of conscience, detained solely for their peaceful trade union activities.

END_OF_DOCUMENT_TOKEN_TO_BE_REPLACED

Trade Unionist Mansour Ossanlu, age 49, is the leader of the Union of Workers of the Tehran and Suburbs Bus Company (Syndica Sherkat-e Vahed). He has been peacefully working to obtain better conditions for workers in Iran and to end discriminatory laws and practices that curtail workers’ rights in Iran. He is currently serving a five-year prison sentence for “acts against national security” and “propaganda against the system.” He had been previously arrested and detained several times for his peaceful labor activism and severely beaten in custody, causing damage to his retinas. He is currently serving his term in a prison for violent criminals and has been mistreated by staff and other inmates. He suffers from several severe health problems, but has not received necessary medical treatment.

Mansour Ossanlu is one of Amnesty International’s 10 priority cases who you can help free by participating in our Global Write-a-thon running from December 5-13. Amnesty International considers him a prisoner of conscience who is being detained on vaguely worded charges in order to halt his efforts to build strong trades unions capable of defending the human rights of workers.

END_OF_DOCUMENT_TOKEN_TO_BE_REPLACED

Enormous crowds throng the streets of Tehran and great excitement is in the air.  Commentators note that the June 12 presidential elections in Iran could be the most important election in thirty years.  In the previous presidential election of 2005, only a minority of eligible voters actually went to the polls. No one expects that to be the case this year as the country’s young people—most Iranians were born after the Revolution of 1979—are expected to turn out in large numbers.

As Iranians prepare to go to the polls to elect their president, human rights has surprisingly emerged as a subject of debate among the four candidates.  Human rights activists wonder whether the unexpected airing of this once-taboo subject augurs a positive change.  Is this a step towards a new future of respect for human rights?  At the same time Amnesty International has documented the Iranian authorities’ continued brutal crackdown on wide sectors of Iranian society—women’s rights activists, students, journalists and bloggers, labor rights activists, and religious minorities.

It is clear that the exuberance expressed by the Iranian people in this election is an indication of their desire for a change, and especially for an improvement of Iran’s human rights record. The Iranian authorities should not assume that these yearnings for change will disappear after the election is over. Human rights activists hope that the Iranian authorities will recognize that the population’s demand for an end to human rights violations must be taken seriously, but also that allowing Iran’s vibrant civil society and activists to flourish without repression would create tangible benefits for Iran.

That is why human rights activists look to this historic election and allow ourselves to dream of what a future could be if labor activist Mansour Ossanlu who fought passionately for the rights of transit workers, could be released from prison and could work openly and freely to better the lives of the millions of hard-working Iranian laborers.  Or if Emaddedin Baghi, one of the great public intellectuals of our time, would no longer face constant government harassment in his efforts to advocate for more democracy and an end to executions, especially the horror of juvenile executions.  Or if instead of imprisoning AIDS researchers Kamiar and Arash Alaei on absurd charges of plotting to overthrow the government, these caring physicians would be allowed to carry out their internationally acclaimed work to prevent and treat HIV.  Or if instead of arresting and constantly harassing women rights activists such as Jelva Javaheri, the Iranian authorities could champion these feisty and tireless women in their efforts to improve the lives of Iranian women.

All of these heroes are great and inspiring role models not just for Iranians, but for people everywhere in the world. As the presidential candidates accuse each other of undermining Iran’s standing in the world, we know that allowing Iran’s activists to carry out their work free of harassment would bring favorable international recognition and honor to Iran. Will the discussions about human rights in the presidential debates really result in tangible improvements? This will only happen when the Iranian government really listens to those millions of Iranian voices roaring in the streets around the clock.