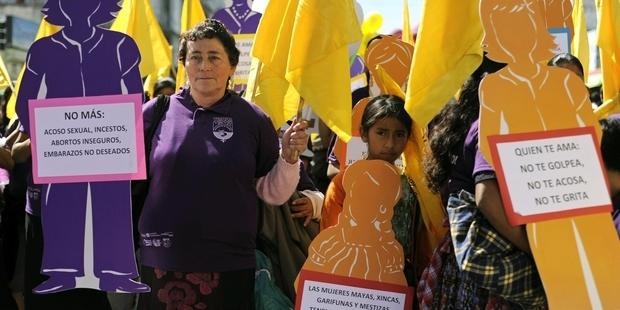 March to protest violence against women in Guatemala.

The good news is that we know one of the main causes of gender based violence in Guatemala. Under normal circumstances, identifying such a cause would be a great step forward, as it would enable the police, courts, and other authorities to make substantial progress in protecting women from violence.

The bad news is that the main cause of femicide that Amnesty International has identified is government inaction and the resulting impunity—human rights abusers can literally get away with murder in Guatemala, especially when their victims are women.  Amnesty found that less than 4 percent of homicide cases result in the conviction of those responsible. This low rate, in turn, is largely the result of insufficient and ineffective investigations.

END_OF_DOCUMENT_TOKEN_TO_BE_REPLACED

Yesterday, members of Congress and human rights advocates, including Amnesty’s celebrity spokesperson Samantha Mathis, made the case for passing the International Violence Against Women Act (IVAWA) on Capitol Hill.  At the breakfast briefing in the Rayburn House Office Building, the audience listened to a distinguished panel present compelling accounts of the heroism and bravery of women and girls globally. The briefing, titled “Stories of Courage and Success: Surviving and Ending Violence Against Women and Girls Internationally,” was infused with the possibility of overcoming gender based violence around the world.

The panel was joined by members of Congress who are IVAWA champions in the House, Representatives Ted Poe (R-TX) and Jan Schakowsky (D-IL).  Both members, who coordinated the event along with lead bill sponsor Representative Bill Delahunt (D-MA), made inspiring remarks on why they personally endorse and support the legislation.

One of the panelists, Rose Mapendo, a survivor and advocate from the Democratic Republic of Congo, gave some of the most gripping testimony. She began by sharing a song she had gained strength from when she was imprisoned with her family in the Democratic Republic of Congo. Rose detailed how she escaped with nine of her 10 children and eventually resettled in Arizona. She was finally reunited with her lost daughter more than a decade later. Ms. Mapendo has survived the violence of genocide and is helping to bring peace to her country and others. She is the subject of a new documentary by PBS called “Pushing the Elephant.”

END_OF_DOCUMENT_TOKEN_TO_BE_REPLACED

Member of staff at the FAFG studying human remains in order to identify them, 12 June 2008. © Private

Excavating human remains, using forensic techniques to identify them, hoping the evidence will help bring the killers to justice–it may sound fascinating and even glamorous to some, but this is no “CSI Miami”. These investigators have been threatened, followed, watched, and shot at on many occasions because of their work to combat impunity. The Guatemalan Foundation of Forensic Anthropology (Fundación Guatemalteca de Antropología Forense – FAFG) carries out forensic investigations and exhumations of mass graves dating from the time of Guatemala’s internal armed conflict (1960-1996). The uncovering of mass graves and the identification of human remains is a key contribution to the pursuit of truth, justice and reparation for the relatives of the dead and disappeared and the survivors of the armed conflict, most of whom are indigenous people.

Despite hard work by organizations like the FAFG, and high-profile individuals like Nobel laureate Rigoberta Menchú, violations against human rights defenders in Guatemala are widespread and show no signs of improvement. Many defenders have received so many threats and acts of intimidation that they have stopped or radically curtailed their important work. You can lend your support and encouragement to the FAFG by taking part in this year’s Holiday Card Action, in which people send cards with messages of solidarity and hope to human rights defenders, prisoners of conscience and others who may fear they’ve been forgotten by the world.