More than 100 people were “disappeared” by the U.S. government and shuttled to secret detention sites between 2002 and 2008. Many were tortured.

Thanks to a new U.S. Senate report, we know more about how this happened than ever before. We’re calling it “The American Torture Story.” It’s a story that had to be written: and now it’s a story that must be read.

Shockingly, the US Justice Department, charged with investigating violations of the law, is apparently refusing to read to this Senate study—let alone act upon it. And as a new Amnesty International report shows: No one has been brought to justice. The United States is providing de facto amnesty to torturers.

Here’s 6 ways that those responsible have gotten away with torture – and 6 reasons we must act. END_OF_DOCUMENT_TOKEN_TO_BE_REPLACED 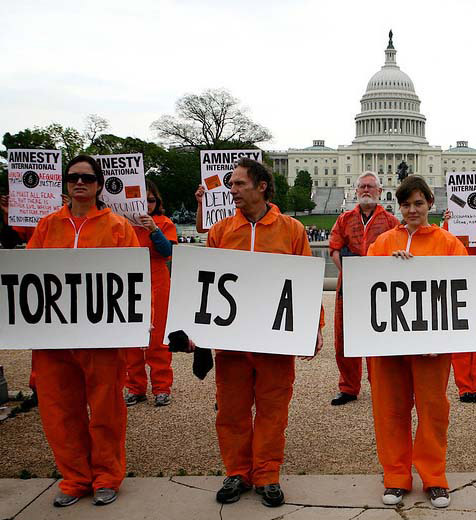 Last Friday seven former Directors of Central Intelligence wrote an open letter to President Obama calling for him to reverse the Attorney General’s decision to reopen an investigation into alleged criminal acts committed by CIA interrogators.

This letter marks a new low point in the debate about accountability. Can it really be true that none of the authors are in any way troubled that officers in an agency they once ran tortured prisoners in their care?

The authors state that these cases have already been reviewed and discarded by career Department of Justice prosecutors and should thus remain closed. They neglect to note that the Justice Department was hardly a disinterested party at the time these investigations occurred.

They seem to suggest that good faith and government service should somehow immunize civil servants from being held accountable for their actions. Yet war crimes, crimes against humanity, torture, and even genocide are by their very definition committed by public servants.

Men and women in uniform have known for more than a hundred years that they have to act within certain boundaries in war. Those who cross these boundaries commit criminal acts pure and simple. This is the standard we hold other nations to and it is the standard we should hold ourselves to.

The authors argue that prosecutions will discourage American intelligence officers from taking risks to protect their country. Certainly it will force them to consider the consequences of their actions and that is no bad thing. No good can ever come of an intelligence agency that considers itself to be above the law.

The argument that disclosing the interrogation methods now discontinued might provide operational advantage to Al Qaeda is patently absurd. Not least, because the Bush administration has already released numerous former detainees who have told their stories in the Arab media.

Equally, western intelligence services are much more concerned at the potential criminal liability incurred by cooperating and assisting a rogue US intelligence community apparently unconstrained by consideration of international legal standards than by any perceived America inability to keep secrets.

It is not difficult to understand or even admire the loyalty and sense of esprit de corps that prompted this letter. But there are much bigger issues in play here than team spirit.

It is no exaggeration to argue that what is at stake here is the very soul of America. Are we a civilized people that stands resolutely for the principles enshrined in our constitution or do we cut and run at the first sign of trouble?

The Founding Fathers rejected arbitrary imprisonment, torture and total war in favor of something greater – the first modern state built on a foundation of individual human rights and the rule of law.

‘He may be a bastard, but he’s our bastard’ cannot ever be standard by which guilt or innocence is judged in a mature democracy. We undermine this foundation at our peril.