The Muslim body in the so-called War on Terror has been treated as if it is without value and inconsequential. Muslim bodies have been detained, extradited, tortured, and unlawfully killed. Muslim lives have been drowned in a sea of policy and rhetoric that justifies the loss of lives as “collateral damage” in the name of protecting U.S. security.  Methods which would otherwise be considered brutal and inconsistent with the U.S. government claims to uphold democracy and human rights position Muslims as less than human, and in this way their lives and their deaths are treated as inconsequential.

According to some estimates, as many as 1.3 million Iraqis, Afghanis, and Pakistanis have died in the War on Terror. In polls that survey the American public about the use of torture, virtually none address torture as a human rights violation; they merely question whether torture tactics are “justified” or not. Dehumanization in the War on Terror legitimizes violence against Muslims. After all, human rights only apply to those recognized as belonging to the human family; for Muslim “others,” their subhuman status legitimizes the perpetration of violence against them.

This dehumanization of Muslims explains why 779 Muslim men have been imprisoned in Guantanamo Bay over the course of the last 14 years, many of whom were subjected to enforced disappearance, and arbitrary detention, and 91 continue to be indefinitely detained. It explains why, when President Obama speaks about closing Guantanamo Bay, he speaks not of the lives that were and continue to be destroyed, but of the policy rationales that only include fiscal and security reasons. It explains why released prisoners are often sent to third countries where they have no ties and essentially live unacknowledged lives marred by the stigma of the “terrorist” label and trauma resulting from years of detention and torture.

As Guantanamo enters its 15th year in operation, let’s acknowledge these 4 issues: 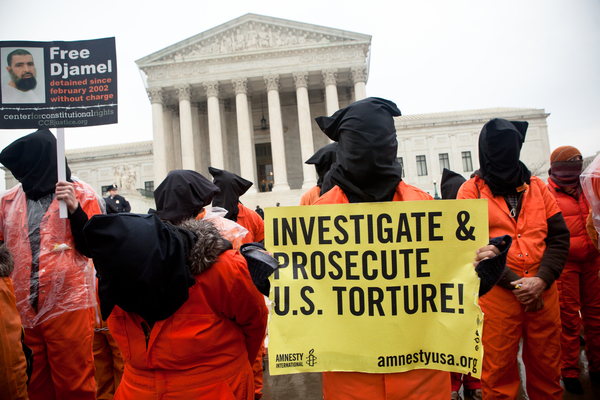 In President Obama’s last year as president, it is imperative that he fulfills his promise to close Guantanamo Bay. This will not rectify the injustices that have been committed behind prison walls under the guise of security, nor will it restore the lives of those who languished and died in Guantanamo.  Closing Guantanamo will not end the War on Terror, but will hopefully be one small step forward: it will reignite the call for accountability; it may bring former prisoners some semblance of justice.

“Hardship is the only language that is used here. Anybody who is able to die will be able to achieve happiness for himself, he has no other hope except that.”  These heartbreaking words were written by Adnan Latif, a prisoner who committed suicide in Guantanamo. Closing the detention camp is President Obama’s responsibility, and time is running out for him to do it before he leaves office.

2 thoughts on “When Life is Disposable: Muslim Bodies as Precarious in the War on Terror”