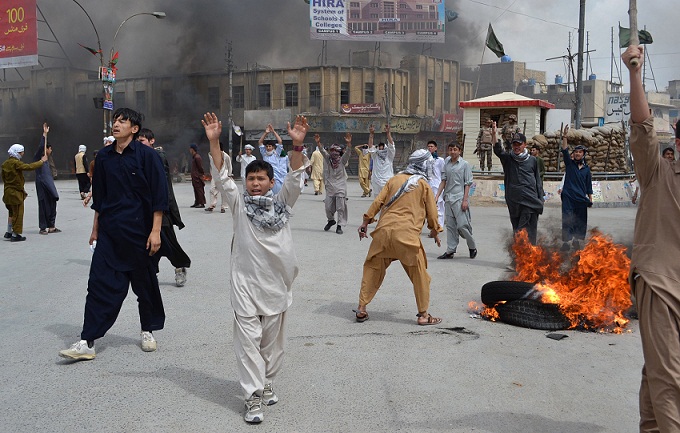 For hundreds of years, the Hazara people of Pakistan had lived in the shadows of the low mountains of Quetta.  Located on the border between Iran, Afghanistan and Pakistan, the city has always been a crossroads of goods and people.  Belonging to the minority Shia sect of Islam and easily distinguishable from the other ethnic groups of the region because of their Central Asian features, the Hazara are an easy target.

In particular, the Lashkar-e-Jhangvi, a sectarian, militant group have been targeting the Hazara minority in Balochistan in a series of brazen attacks.  Last September, religious processions organized by the community were targeted twice. Then came the brutal assault on a bus carrying Shia Hazara pilgrims to Quetta. All the men and boys aboard were taken out of the bus, lined up and shot, as their mothers, wives and sisters watched from inside. The assailants were unafraid, and had insured that the highway was blocked on both ends when they conducted that ambush.  Later that evening, two more Hazara men were killed after being dragged out of their cars at a traffic light in Quetta. The total death toll for the day was over thirty dead and scores more injured.

The killing has continued since and has taken on a frenetic pace this past week. Since March 26, 2012, nearly 30 people have died in targeted attacks on the Hazara Shia. Six were shot dead execution style while drinking tea at one of the many roadside stalls in Quetta. The attack on March 29, again involved a hijacked bus whose Hazara passengers, including a woman, were singled out and then summarily murdered with automatic weapons.

Recent days have  brought even more attacks, with the hapless members of the community taking to the streets of Quetta, before an apathetic provincial administration and the wrath of terrorist groups that can kill with impunity.

According to a report produced by the community, local authorities in Balochistan have taken only superficial measures or none at all to stop the killings or bring their killers to justice. Public religious edicts issued by Lashkar-e-Jhangvi members and labeling the extermination of Hazara as a religious duty continue to be distributed freely in mosques, via handbill and even text message in Quetta.

The volatile mix of apathy and terror is exacerbated by the general unrest and lawlessness in Baluchistan. Unlike other nationalist forces in the province, the Hazara are patriotic Pakistanis unwilling to support any secessionist causes, which makes their situation even more precarious.

In their own words; the Shia Hazara of Quetta are a peace love community under siege from a collusion of forces; the brazen Lashkar-e-Jhangvi whose assailants are killing them at will, an apathetic Balochistan Government that does not see them as worth protecting, and the silence of everyone else who is watching them die.

Lacking political connections, resources and unwilling to take on the same tactics of violence and intimidation used by all those around them; the only recourse that the Hazara of Quetta can hope for is that the world who hears of them, does not think they are too small, too unknown and too helpless to be allowed to exist.

4 thoughts on “Under Siege of Terror: The Shia Hazara of Pakistan”