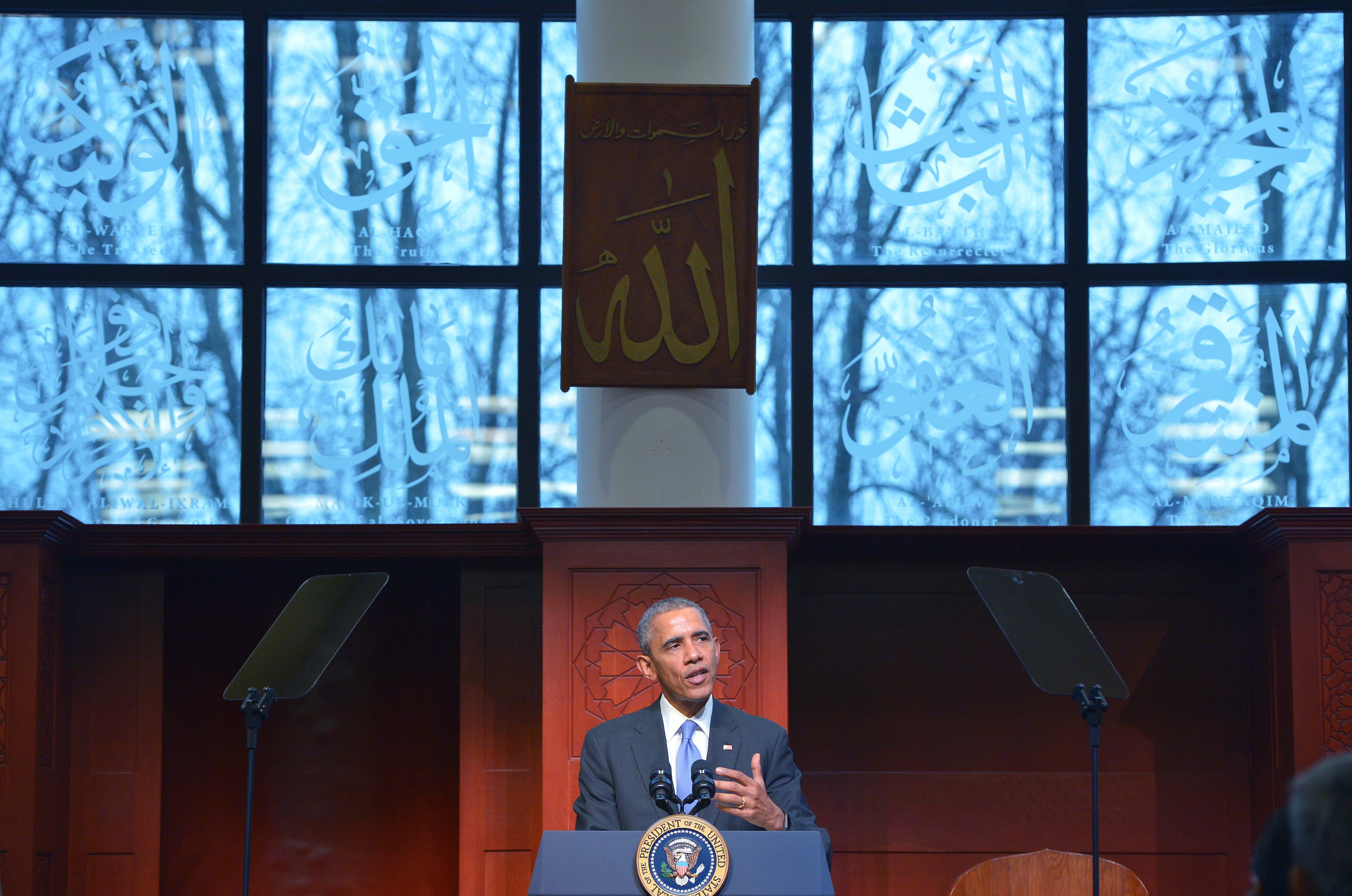 This may sound uneventful, but it was actually bold. Muslims, Islam and the Quran are nearly dirty words in the U.S. political mainstream right now.

We have a lot of problems with Obama administration’s policies when it comes to American Muslims: suspicionless surveillance, counter-extremism programs that unfairly target and stigmatize Muslim communities, among them. President Obama’s policies have often not followed his words.

But his words were powerful, and they kick off a necessary conversation that we will be having in a series of blogs. This country is changing: its ideals of religious freedom and tolerance are being distorted and sometimes obscured. Instead of touting this as a country of immigrants, public figures seek to spread the message that immigrants are unwelcome here. Even as the world witnesses the largest refugee crisis since World War II, in U.S. politics the instincts of fear and distrust are displacing those of sympathy and charity. 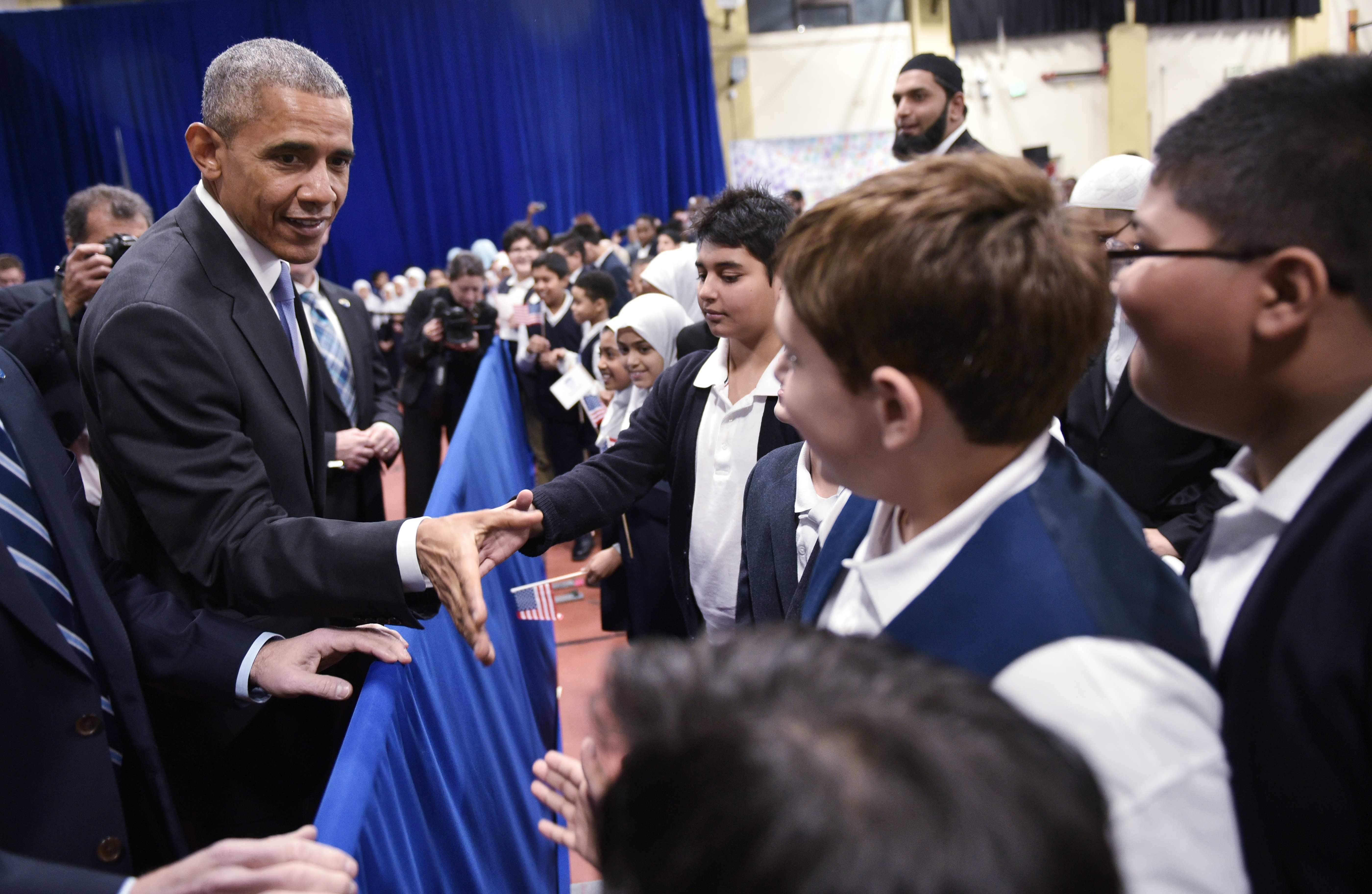 President Obama’s words were especially stark in this context. They affirmed the humanity and dignity of American Muslims. And if we really are at an inflection point in U.S. history, as some say, then this speech matters. If mainstream media fear-mongering has primed the U.S. public for a return to internment and systematic discrimination based on ethnicity and religion – some day in the not so distant future – then this speech matters. It matters that in a post-9/11, post-Paris attacks environment, the commander-in-chief said these words:

Obama’s speech gave voice to the estimated 3 million American Muslims who fear for themselves, their children and their grandchildren because of the climate in the country:

I’ve had people write to me and say, I feel like I’m a second-class citizen.  I’ve had mothers write and say, “my heart cries every night,” thinking about how her daughter might be treated at school.  A girl from Ohio, 13 years old, told me, “I’m scared.”  A girl from Texas signed her letter “a confused 14-year-old trying to find her place in the world.” These are children just like mine.  And the notion that they would be filled with doubt and questioning their places in this great country of ours at a time when they’ve got enough to worry about — it’s hard being a teenager already — that’s not who we are. We’re one American family.  And when any part of our family starts to feel separate or second-class or targeted, it tears at the very fabric of our nation. 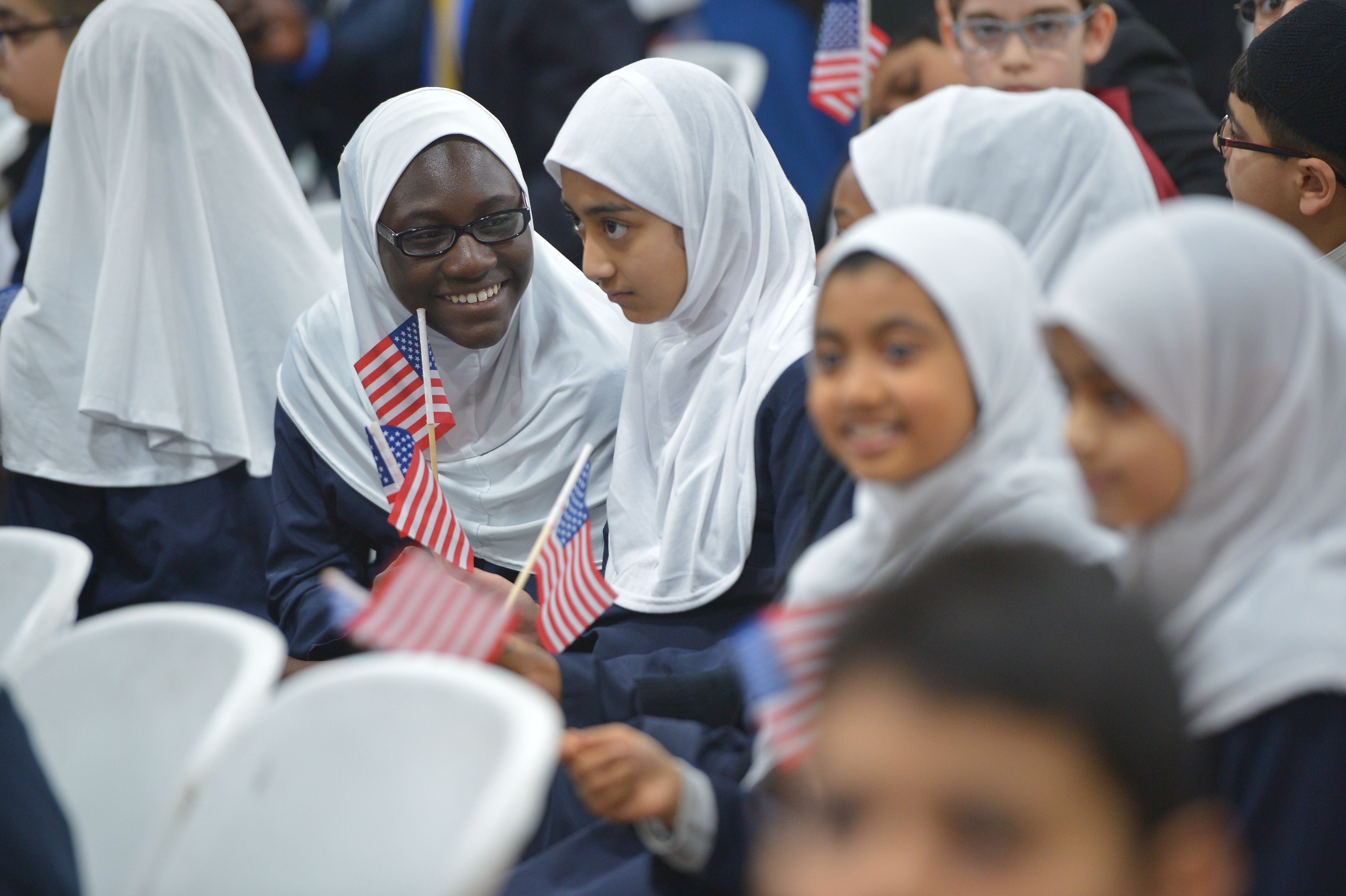 Girls hold US flags while waiting for US President Barack Obama after he spoke at the Islamic Society of Baltimore, in Windsor Mill, Maryland on February 3, 2016. / AFP / Mandel Ngan (Photo credit should read MANDEL NGAN/AFP/Getty Images)

This is a fact totally absent from mainstream media debates about American Muslims and their purported collective responsibility following the Paris and San Bernadino attacks:

Here’s another fact:  Islam has always been part of America. Starting in colonial times, many of the slaves brought here from Africa were Muslim.  And even in their bondage, some kept their faith alive.  A few even won their freedom and became known to many Americans.  And when enshrining the freedom of religion in our Constitution and our Bill of Rights, our Founders meant what they said when they said it applied to all religions.

President Obama spoke eloquently of freedom of religion and belief, a human right:

“[A]s Americans, we have to stay true to our core values, and that includes freedom of religion for all faiths…And when any religious group is targeted, we all have a responsibility to speak up.  And we have to reject a politics that seeks to manipulate prejudice or bias, and targets people because of religion.” 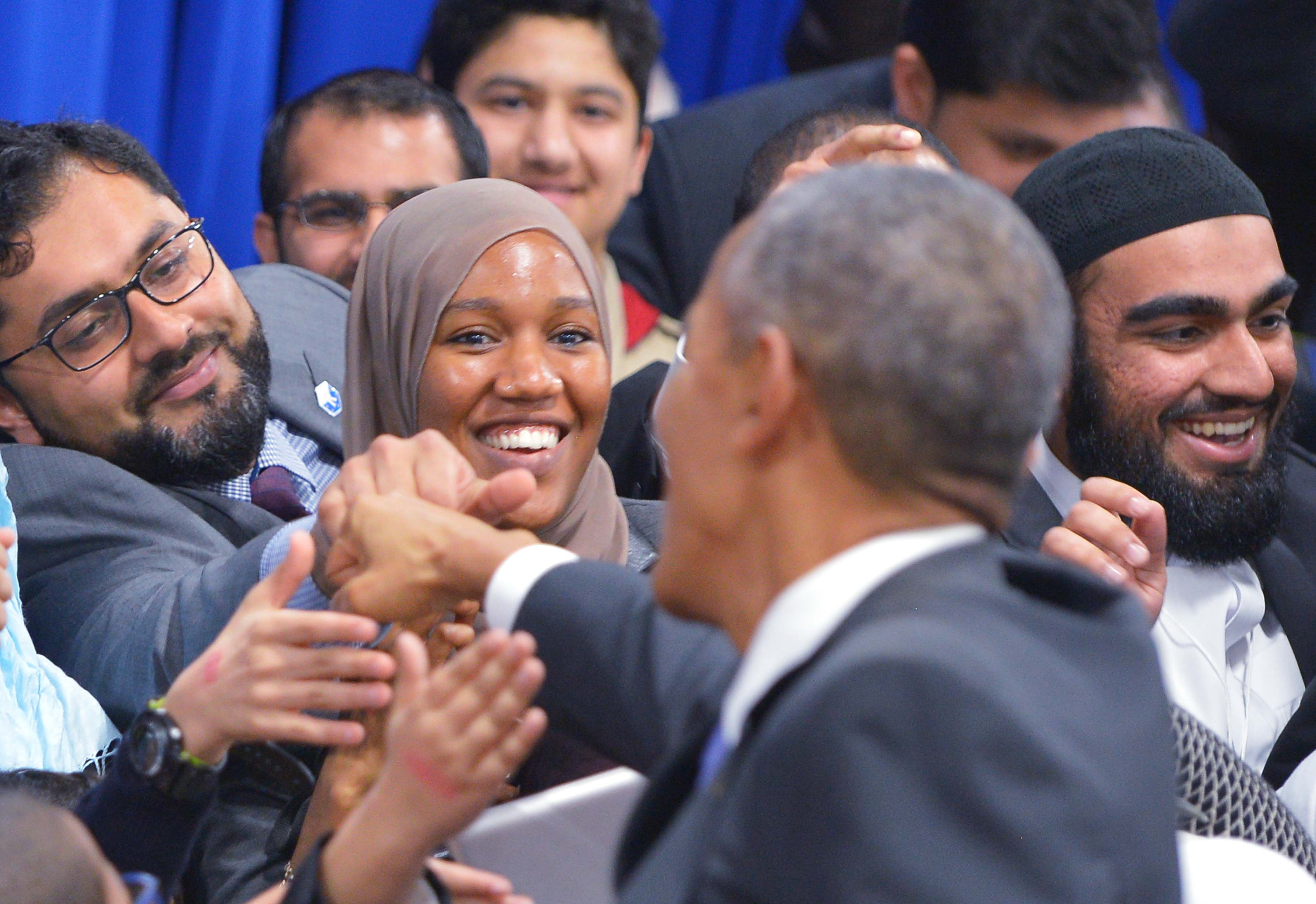 Though his policies have not followed his words, President Obama’s rejection of suspcionless surveillance and racial profiling was unequivocal. We will continue to push for his administration to put these words into practice:

Our values must guide us in this work.  Engagement with Muslim American communities must never be a cover for surveillance. We can’t give in to profiling entire groups of people.  There’s no one single profile of terrorists.  We can’t securitize our entire relationship with Muslim Americans.  We can’t deal with you solely through the prism of law enforcement.  We’ve got to build trust and mutual respect.  That’s how we’ll keep our communities strong and our communities united.

This was perhaps the most emotionally impactful part of President Obama’s speech. It was a clear rejection of the politics of division and intolerance, propagated both by politicians in the U.S. and many armed groups:

And today, there are voices in this world, particularly over the Internet, who are constantly claiming that you have to choose between your identities — as a Muslim, for example, or an American.  Do not believe them.  If you’re ever wondering whether you fit in here, let me say it as clearly as I can, as President of the United States:  You fit in here — right here. You’re right where you belong. You’re part of America, too. You’re not Muslim or American. You’re Muslim and American. 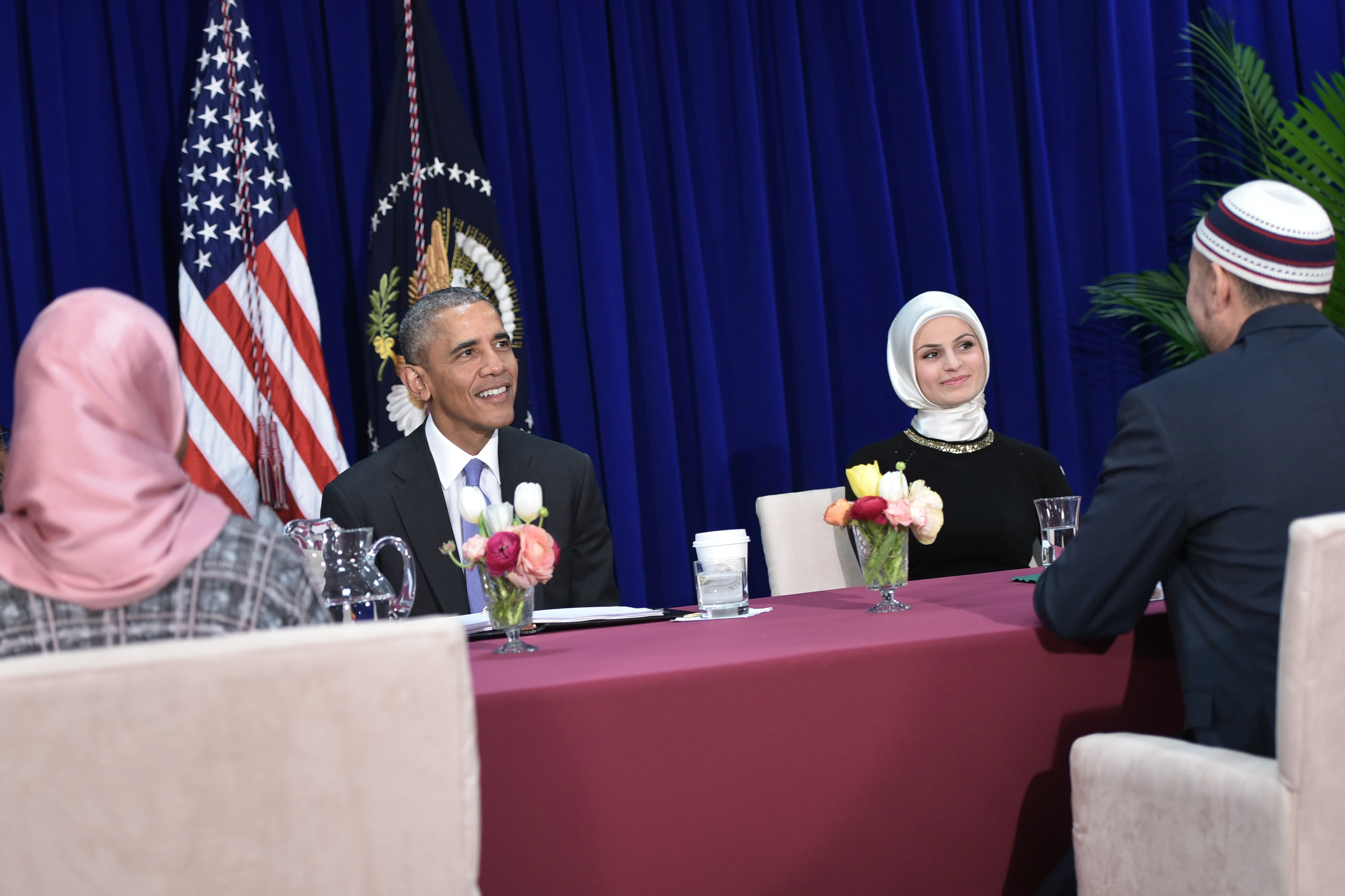 US President Barack Obama participates in a roundtable discussion with members of the Muslim community while visiting the Islamic Society of Baltimore February 3, 2016 in Windsor Mill, Maryland.
Seven years into his presidency, Barack Obama made his first trip to an American mosque on February 4, offering a high-profile rebuttal of harsh Republican election-year rhetoric against Muslims.
/ AFP / MANDEL NGAN (Photo credit should read MANDEL NGAN/AFP/Getty Images)

You can read the full speech here and watch it here. Learn more about our work on surveillance and freedom of expression in American Muslim communities.