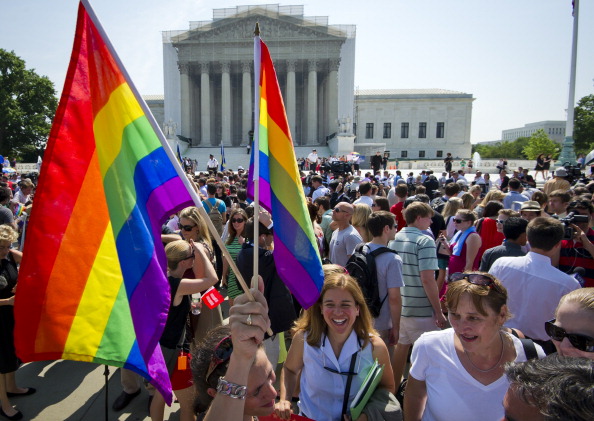 Edie’s case, United States v. Windsor challenged section 3 of DOMA which defines marriage as between one man and one woman for the purposes of federal law. DOMA violates the human rights of lesbian and gay couples by discriminating against legally married same-sex couples. Like Edie, same-sex couples are denied the full range of federal rights and protections that are extended to opposite-sex couples. This includes over 1,100 rights and benefits such as the ability to file joint tax returns or to receive social security survivor benefits when a spouse passes away.

Today the U.S. Supreme Court agreed with Edie and ruled that this discrimination is unconstitutional. In finding that the law violates the U. S. Constitution, the Court said that “the principal purpose and the necessary effect of this law are to demean those persons who are in a lawful same-sex marriage.”

As a result, lawfully married same-sex couples will now be able to access federal protections and benefits in the same way as opposite-sex married couples.

The Supreme Court ruled on a second case today affecting LGBT human rights, a case called Hollingsworth v. Perry. Perry was a challenge to Proposition 8, the California constitutional amendment which limited marriage in the state of California as between a “man and a woman.” This amendment discriminates against lesbian and gay couples and violates their human rights by denying them the ability to marry.

The Court found that the people who brought the case to defend the discriminatory amendment “lacked standing” to do so. The Court dismissed the case on procedural grounds but upheld a lower court ruling finding Proposition 8 unconstitutional.

As a result, we expect that same-sex couples in California will have the right to marry.

However, the Supreme Court’s decision effectively punts the issue of marriage equality for same-sex couples throughout the United States to a later date.

Amnesty International believes that all people, regardless of their sexual orientation or gender identity, should be able to enjoy the full range of human rights without exception – this includes the right to marriage.

Human rights are universal and inherent, and we will continue to work to support LGBT rights until all people are able to access the full range of their human rights.

3 thoughts on “What Do Today’s Supreme Court Decisions Mean for LGBT Human Rights?”