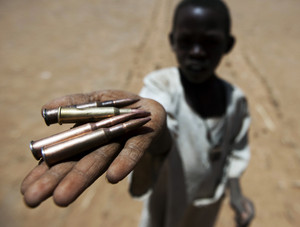 U.S. negotiators asserted that even a substantial risk of mass atrocities should not necessarily prevent states from proceeding with arms exports.

”
The Arms Trade Treaty presents a once-in-a-generation opportunity to stop arms from getting into the hands of dictators like Syria’s Bashar Assad.  The negotiations now underway are the culmination of a decade-long effort to get nations to assume responsibility for preventing the flow of arms used to perpetrate human rights abuses.

A strong treaty with human rights at its core — which has the support of most NATO countries, Canada, Japan, Australia and other close U.S. allies – would also curb exports of weapons that escalate drug wars, sex trafficking, and sexual violence.

One person dies every minute in armed conflict; 1,500 people every single day.  In more than 60 percent of the human rights abuses documented by Amnesty International, weapons were involved, from mass rapes and executions to disappearances and the recruitment of child soldiers.

These are the real weapons of mass destruction, killing person by person and village by village.

Amnesty was shocked to learn that there are more stringent rules governing  the global trade on bananas and bottled water than there are on the export of AK-47s.

A strong Arms Trade Treaty has the potential to begin to bring some control over a world awash in weapons that fuel armed conflicts and human rights abuses.

As these negotiations reach their conclusion this month, the United States should stand with its allies, not align itself with Russia, China, and other unscrupulous arms suppliers.  Without U.S. leadership to promote a strong Arms Trade Treaty, irresponsible countries will continue to send weapons to Syria, Sudan, and other crisis spots, exploiting loopholes carved out by the United States against its own long-term interests.

President Obama must not weaken this vital global effort.

The Administration has acknowledged that the Arms Trade Treaty would implement global standards that are similar to those that the United States has already adopted in its own approach to arms transfers.  The State Department, according to its website,

“vets its assistance to foreign security forces, as well as certain Department of Defense training programs, to ensure that recipients have not committed gross human rights abuses.  When the vetting process uncovers credible evidence … [of] a gross violation of human rights, U.S. assistance is withheld.”

So why is the U.S delegation at the arms talks advancing a global standard weaker than existing U.S. practice?

According to its statement on Thursday, the U.S. government now prefers a treaty that only requires countries to take “into account” a range of considerations – including human rights concerns, national security, and regional stability – before deciding to ship weapons to countries where the risk they will be used to commit serious violations of human rights is high. Especially troubling is the United States’ assertion that “we want to ensure that states are asking the right questions and striving to strike the right balance when making decisions about the export of conventional arms.”

This fence-straddling approach won’t stop the flow of guns and bullets, tanks and gunships into the hands of dictators, armed militias and others.

After more than ten years of work to place the treaty on the U.N. agenda, we need a clear international standard against arms transfers that fuel abuses.  The absence of such constraints has allowed weapons to pour into Syria, making possible 16 months of government-sponsored bloodshed that has claimed more than 14,000 lives.  Those who have exported weapons to Syria are willing accomplices to the conflict.

It’s time for the United States to help end this onslaught and come out in favor of an Arms Trade Treaty that is strong on human rights.